As you may recall from our previous blog post, we love Mr. John Joseph Adams. He is the series editor of Best American Science Fiction & Fantasy, the editor and publisher-in-chief of the 2014 Hugo Award-winning Lightspeed magazine and its sister magazine Nightmare (for which Skyboat produces monthly short story podcasts), and the co-host of Wired.com’s The Geek’s Guide to the Galaxy podcast. He is also the bestselling editor of numerous anthologies,  including The Apocalypse Triptych (co-edited by Hugh Howey and consisting of The End is Nigh, The End is Now, and The End Has Come – now available on audio), OPERATION ARCANA, and, of course, WASTELANDS and now WASTELANDS 2. 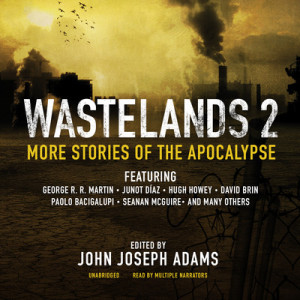 , and Pestilence—the Four Horsemen of the Apocalypse, the harbingers of Armageddon—these are our guides through the Wastelands.

WASTELANDS 2: MORE STORIES OF THE APOCALYPSE is a new anthology of postapocalyptic literature from some of the most renowned authors in the science fiction, fantasy, and horror genres today, including George R. R. Martin, Hugh Howey, Junot Díaz, David Brin, and many more. This eclectic mix of tales explores famine, death, war, pestilence, and harbingers of the biblical apocalypse. –downpour.com

Start your journey into the WASTELANDS and get both anthologies on downpour.com today!

The Tamarisk Hunter by Paolo Bacigalupi read by Kristoffer Tabori

“…for a single yesterday” by George R. R. Martin read by Stefan Rudnicki

A Beginner’s Guide to Survival Before, During, and After the Apocalypse by Christopher Barzak read by Arthur Morey

The Postman by David Brin read by Stefan Rudnicki

Patient Zero by Tananarive Due read by Paul Boehmer

Advertising at the End of the World by Keffy R. M. Kehrli read by Cassandra Campbell

Tight Little Stitches in a Dead Man’s Back by Joe R. Lansdale read by Stefan Rudnicki

After the Apocalypse by Maureen F. McHugh read by Jamye Grant

The Traditional by Maria Dahvana Headley read by Judy Young