“John Joseph Adams has become one of those editors who I know will put together something I will love to read and know that the book I’m about to purchase isn’t going to let me down.” –Wil Wheaton 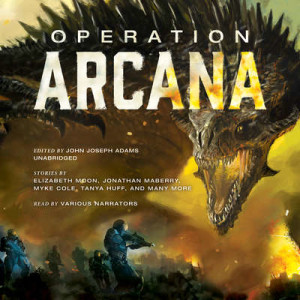 ree more, Wil! So, we’re at it again. (WASTELANDS and WASTELANDS 2 too weren’t enough.)

Skyboat, with Blackstone Audio, is bringing you another anthology edited by the illustrious John Joseph Adams. Barnes & Noble called John “king of the anthology world” – we say: long may he reign.

“In the realms of fantasy, the battlefield is where heroism comes alive, magic is unleashed, and legends are made and unmade. From the War of the Ring, Tolkien’s epic battle of good versus evil, to the Battle of the Blackwater, George R. R. Martin’s grim portrait of the horror and futility of war, these fantastical conflicts reflect our highest hopes and darkest fears, bringing us mesmerizing visions of silver spears shining in the sun and vast hordes of savage beasts who threaten to destroy all that we hold dear.

The Damned One Hundred by Jonathan Maberry read by Arthur Morey

Weapons in the Earth by Myke Cole read by Paul Boehmer

The Way Home by Linda Nagata read by Stefan Rudnicki

Let the battle begin! Head over to downpour.com to purchase your copy today!