The author? Joe R. Lansdale is the author of over 30 novels and 200 short pieces, fiction and nonfiction. He has received the Edgar Award, seven Bram Stokers, the British Fantasy Award, and many others. He’s been called “an immense talent” by Booklist; “a born storyteller” by Robert Bloch; and The New York Times Book Review declares he has “a folklorist’s eye for telling detail and a front-porch raconteur’s sense of pace.” His novella, Bubba Hotep, was made into a movie of the same name. We simply call him amazing. 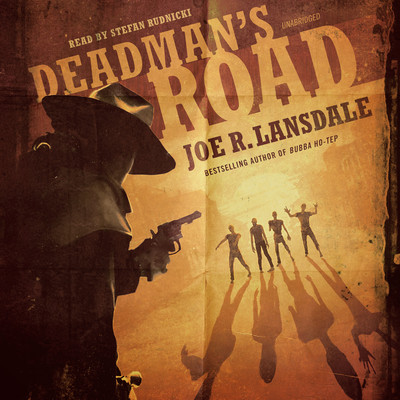 The Wild West has never seen the likes of the Reverend Jebediah Mercer, a hard man wielding a burning Bible in the battle between God and the devil, in an endless struggle he’s not sure he cares who wins. With its five stories laced with fast-paced action, nonstop humor, and spine-tingling horror, Deadman’s Road is your ride to hell, in which a vengeful shaman curses a town by conjuring a seemingly unstoppable army of the undead; an ill-advised shortcut leads to a bees’ nest of terror; a man stands condemned, not for murdering his wife but for raising the Lovecraftian horror that killed her; a woman is attacked by werewolves and left for dead in a ghost town; and a mining camp faces off with a horde of cannibalistic fiends. It’s just crazy enough to captivate, and it’s no wonder we here at Skyboat are so excited to release this thrilling adventure by an author who the San Francisco Book Review called the “undisputed master of East Texas gothic horror”. Performed by Grammy and Audie Award Winning Stefan Rudnicki. Need we say more?

We have been fans of Lansdale’s forever, and are thrilled that Joe has granted us the audio rights to publish this book. We donned our velvet production gloves and went at it with gusto. It’s books like this that exemplify all the passion and exhilaration we feel for the works we are now publishing under our own imprint.

In fact, Lansdale himself was kind enough to share a few (more) words of his own! In the following interview, he discusses a range of topics, including upcoming projects with his children, a balanced social media presence, and how he picks his pleasure reading.

Skyboat: You’ve written in a number of formats, from graphic novels and comic books to chapbooks and screenplays to short stories and novels. Do you have a favorite format?

JL: I really don’t have a favorite kind of story, but I prefer prose by a long shot. I like short stories and novellas best, and then novels. All other formats are secondary, but that doesn’t mean I don’t enjoy them. I do.

Skyboat: A film based on your novel Cold in July was released in May and Savage Season is in the works. Your novels burst with imaginative, oftentimes haunting, visual imagery. Do you think writing comic books and screenplays has made you a stronger novelist, or vice versa?

JL: I do. I think it’s more my early love for comics and film more even than writing them, though that certainly contributes. I’ve always said comics are why I wanted to become a writer, and then film added to that, and of course prose was the most important. But it came later, actually. I was trying to write comics early on, and the visuals of comics and film certainly effected me. Later on, music and radio shows I was able to hear and collect were also contributors to the way I told a story. I love radio shows. Those things and pure word of mouth storytelling. My people were storytellers and they had a way of telling a story, and I liked that and wanted to do it early on. I learned to put those stories on paper, and influenced by prose, comics, and film, I think I had a better understanding of how to do it. I do think it works in reverse as well. Prose helps me write comics and scripts. Each end of the storytelling spectrum teaches you new lessons.

SkyBoat: DEAD IN THE WEST was originally published in the 1980s and is now included in DEADMAN’S ROAD, along with four novellas, one of which had not previously been published. What prompted this new assemblage and how did you decide what to include?

JL: It was first prompted by Subterranean Press, if memory serves me. DEAD IN THE WEST had gone out of print, and I had written some new stories about the Reverend, and Bill Schaffer thought it might be a good idea to include them in one book, and later Tachyon picked them up again in a trade paper edition. I really liked both editions, but as a writer, I’m always glad where there’s an affordable edition, and I’m glad now there will be an audio.

Skyboat: Can you tell us anything about your current projects?

Skyboat: Can you name a few authors who have impacted your work?

JL: Too many to list accurately. Flannery O’Conner, Harper Lee, Mark Twain, Jack London, Ray Bradbury, Raymond Chandler, Richard Matheson, Charles Beaumont, William F. Nolan, Dashiell Hammett, James Cain, Fred Brown, Robert Bloch, Gerald Kersh, Charles Portis, Ernest Hemingway, F. Scott Fitzgerald, GATSBY is my favorite of his, Steinbeck, a lot of the famous American writers, and it goes on and on. Different writers have been more important to me at different times in my life, or career, and some have sort of stayed with me. The above is a short list of those who have stayed with me. I should also add that Edgar Rice Burroughs is my sentimental favorite author, and there were times when Robert E. Howard was a strong influences, as well as the writers who were influenced by Lovecraft, more than Lovecraft directly, though he certainly influenced me as well, mostly his ideas. I never quite became a fan of his prose. Early on there was also Poe, Arthur Machen, Algernon Blackwood. Lot of individual books and stories by writers whose overall work didn’t impress me that much. Like I said. It’s a long list.

JL: Nope. I still write exactly the same way I always did. I like to make sure my work is promoted, and I like people, but frankly, I wouldn’t mind not doing social medial. I enjoy it when I’m doing it, but I would rather write or read or do martial arts or hang with my family. It’s something I don’t like that much, but I do like the people. It’s just not my preferred way of spending time. I do about thirty minutes a day. It seems like more because I don’t mess around. I do it. And I drop in maybe three or four times a day. But if you put the time all together, rarely do I spend more than a few minutes a day. That way I enjoy it, but it doesn’t take up my life.

Skyboat: Any books piling up on the nightstand?

JL: Always. I’m sent books constantly. I am reading fewer and fewer of the books sent me. I like to pick what I want when I want. Sometimes that’s a book sent to me, but I like to be the one who choose the book to match my mood. Right now I’m reading comics mostly, DC, the 52. I’m behind. I buy a batch of them, read extensively, then don’t’ read them for a long time. I mostly buy collected stories, graphic novels. I don’t buy single comics much, unless the comic is a whole story. I also buy DC archives and read them. I now and then read Marvel, or Dark Horse, IDW, others. It just depends. I reread a lot of the authors I love, non-fiction, new authors – mostly short stories. Always something though. I’m a big believer in reading.

Hard not to be a fan, right? (And did you catch his reference to fellow Skyboat authors Charles Beaumont and Fredric Brown? He is joining some classy company.) For those of us who can’t get enough Lansdale, the release of Deadman’s Road comes at a time in which Lansdale’s presence can be strongly felt in both literature and film. His 1989 novel, Cold in July, was recently made into a movie starring Michael C. Hall. Check out the trailer and be sure to get your copy of Deadman’s Road today!