THE SERENITY HOUSE SERIES: Ella, the Slayer (Book 1) and Henry, the Gaoler (Book 2) THE CIA AS ORGANIZED CRIME: How Illegal Operations Corrupt America and the World

Our Lady of the Open Road and Other Stories from the Long List Anthology, Volume 2 Audiobook

Skyboat Media and editor David Steffen are at it again.  Introducing OUR LADY OF THE OPEN ROAD AND OTHER STORIES FROM THE LONG LIST ANTHOLOGY, VOLUME 2, another collection of stories from the Hugo Awards nominations list on a brand new audiobook. 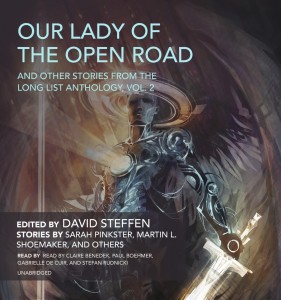 The Hugo Awards are the most prestigious awards for science fiction and fantasy. Each year, the members of the World Science Fiction Convention (Worldcon) meet in a different city.  The 2017 event will be in Helsinki, Finland. The convention members nominate up to five people in each of 15 categories.  Then, a final ballot goes out with the five finalists in each category.

Of course, not every story can make the final ballot.  And that’s where David Steffen comes in.

After the huge success of his Kickstarter campaign for THE LONG LIST ANTHOLOGY, David Steffen decided to do another.  We’re very glad he did.  371 generous backers have pledged over $7,000 to bring this project to life.

Take a listen to this sample of Gabrielle de Cuir reading the title story.

About the editor:  David Steffen is a writer, editor, and web developer living in Minnesota.  He runs the Submission Grinder , a free web tool for writers to track their submissions and find new markets for their work.  He edits the zine Diabolical Plots which began publishing fiction in 2015.  He is also the editor of two volumes of the Long List Anthology: More Stories from the Hugo Award Nomination List.  He has a voracious appetite for audio fiction and writes up Best Of lists of his favorite podcasts every year.
Tagged with → #anthology • #audiobook • #clairebenedek • #davidsteffen • #fantasy • #gabrielledecuir • #hugoaward • #hugos • #jodidorries • #kickstarter • #paulboehmer • #sci-fi • #sciencefiction • #shortstory • #stefanrudnicki
Share →
Tweet