The Hugo Awards are science fiction’s most prestigious awards. Each year, members of the World Science Fiction Society (WSFS) cast their ballots, and the winners are announced at the Hugo Ceremony at Worldcon.

An avid Hugo Award fan, David Steffen has long relied on the Hugo Packet, the package of nominated works members receive before voting, to bolster his “recommended reading” list. In addition to the Hugo Packet, WSFS publishes a longer list of works that were nominated by the Hugo voters but didn’t quite reach the official ballot. David’s goal was to bring together these “longer list” works into one convenient anthology.

We should probably mention David is a self-proclaimed “all-around media enthusiast” and, in addition to working as a software engineer, he writes speculative fiction and runs Diabolical Plots L.L.C., which publishes nonfiction content – reviews, interviews, editorials –  and includes the Submission Grinder, a free-to-use web tool that helps writers find new markets for their work and track their submissions.

Now, where exactly to start? Kickstarter of course!

Over 400 backers pledged over $8,000 dollars to help bring this project to life

After gauging interest from the authors, David created a Kickstarter to gauge reader interest, and, boy, was he surprised! Response was overwhelming positive from every corner. Cory Doctorow even mentioned the campaign on his blog & when David reached out to Skyboat Media about a possible audiobook, well, we knew he was on to something special!

There was enough interest to fund not only the book and the e-book, but also an audiobook version professionally produced by Skyboat Media.

For the narration, Stefan Rudnicki and Gabrielle de Cuir were joined by Vikas Adam, Judy Young, and author Xia Jia, who narrated her story in the original Chinese.

“Because these selections are based on Hugo Award votes, the anthology is especially broad-based, and doesn’t stick to any one sub-genre. In fact, the stories’ subjects range from vampires to superheroes to ballet to high-tech military SF to detective thriller fare to family life in China and Pakistan.” –Stefan Rudnicki 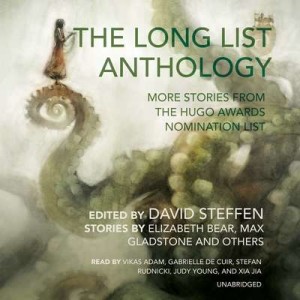 The Long List Anthology is designed to recognize the short works that were nominated for the 2015 Hugo Awards but did not make it into the top five shortlist for the final ballot.

Thus, voted into the Hugo Award’s long list of works—the top fifteen works nominated for each category—were these nine short stories and three novelettes, now made available to a wider audience by award-winning narrators.

When It Ends, He Catches Her by Eugie Foster – read by Stefan Rudnicki

A Kiss With Teeth by Max Gladstone – read by Stefan Rudnicki

The Vaporization Enthalpy of a Peculiar Pakistani Family by Usman T. Malik – read by Vikas Adam

We are the Cloud by Sam J. Miller – read by Stefan Rudnicki

Purchase your copy today! Looking for even more stories? Hop on over to our blog post for OUR LADY OF THE OPEN ROAD AND OTHER STORIES FROM THE LONG LIST ANTHOLOGY, VOLUME 2!