JUNE 19: THE SILENCE OF THE ASONU JUNE 21: THE WAY OF CROSS AND DRAGON 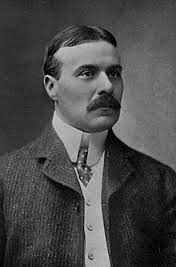 If you missed our post on JUNE 9: PRINCE BULL by CHARLES DICKENS, read by yours truly, then you may have missed out on this terrific project: Going Public…in Shorts.  From the site: “Each narrator has recorded a short piece from the public domain, including the work of Chekhov, Twain, Chopin, Poe, Lovecraft, Fitzgerald, Joyce, Wilde and many others, even Lincoln’s pivotal Second Inaugural Address.”  Stories are free online for one week after they’re posted, and after that available for purchase and download.  All proceeds go to the Reach Out and Read literacy advocacy organization.

Well, today it’s Stefan’s turn, and he chose THE PROPHET’S PARADISE by Robert W. Chambers.  Chambers was a well known writer of the romantic and the supernatural, and nothing garnered him more attention than The King in Yellow, published in 1895.  Stefan has long been a fan of this book.  In fact, he owns one of the few extant copies of the first edition, and he wrote and produced an award-winning play based on a couple of its narratives.  This story is another from the collection, and it’s an experimental little tale that’s more dream snatches than traditional narrative.  A mix of poetry and prosaic impressions, it feels very ahead of its time, inspired by other writers of the macabre such as Poe and Wilde and paving the way for future experimentalists such as Eliot and Stein.  Listen to Stefan’s spirited rendition here—it’s free until 6/26, then available for purchase via Downpour—then hop on over to A Book and a Latte to read Stefan’s exclusive interview with blogger Jen Halligan.

Special thanks to Xe Sands for her incredible work in putting this project together!