BIRTH OF THE FAE: LOCKED OUT OF HEAVEN by Danielle M. Orsino STELLAR #1 & #2 by Ian Graham and Marc A Hutchins. Audiobooks read by Gabrielle de Cuir

“Space opera the way it ought to be…Bujold and Weber, bend the knee; interstellar adventure has a new king, and his name is Walter Jon Williams.” –George R.R. Martin 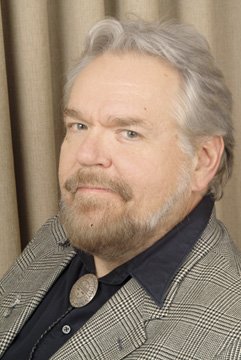 Walter Jon Williams has been nominated for every major science fiction award, including Hugo and Nebula award nominations for his novel City on Fire. His books include The Sundering, The Praxis, Destiny’s Way, The Rift, and The Quillifer trilogy. (Visit Walter’s website for a full listing of his books and, while you’re there, sign up for his newsletter and receive a free ebook!) He lives near Albuquerque, New Mexico, with his wife Kathy Hedges.

Any aspiring sci-fi writers out there who want to learn from the best? Every summer in New Mexico, Walter and fellow author Nancy Kress run Taos Toolbox, a graduate level writing workshop which focuses on providing “talented, burgeoning writers the information necessary to become professionals within the science fiction and fantasy field.”

“I write SF because I was a horrible failure at writing everything else. I was told over and over again that my work was just too unconventional and too weird to see print. I’m pleased to report that, in the world of SF, they hardly ever tell you that. That said, science fiction certainly encourages the asking of the big questions: Who are we, what makes us human, what is our purpose, what is our destiny.” –Excerpt from Chris Moriarty’s Lightspeed Magazine interview with Walter Jon Williams

In an interview with Locus Magazine, Walter refers to the Dread Empire’s Fall series as “a deliberately retro space opera” in which he “wanted to see if it could contain all the classical elements of a space opera (including a space empire and rebellion and space battles and the threat of genocide, and so forth) and not have it be ridiculous.” He also discussed his appreciation of space opera: “All the great metaphors for science fiction make up the elements of space opera. I think there’s something about the subgenre that’s vital to the core of our field. Space exploration and contact with aliens, problems of governance, the future evolution of our species… all that can be in space opera, and it can all come crashing in with a great deal of fun attached.”

Well, as you know, we at Skyboat are serious science fiction fans. (We produce the monthly podcasts for the Hugo Award-winning Lightspeed Magazine and produced a little something called ENDER’S GAME ALIVE: The Full Cast Audioplay by Orson Scott Card, among hundreds of others!) Skyboat and Blackstone Publishing are extremely proud to present all-new audiobooks of the Dread Empire’s Fall trilogy. Fellow science fiction author Charlie Stross hailed Walter Jon Williams as “one of science fiction’s most versatile and elegant writers.”

In his Lightspeed Magazine interview, Walter discussed how his books reflect his own desires as a reader: “Am I out of line to expect simply everything? Story, plot, characters, resolution? At any rate, that’s what I try to deliver.” Boy does he ever. After completing his audiobook recording of THE PRAXIS (which clocks in at 13.5 hours) under the direction of Claire Bloom, science fiction aficionado Stefan Rudnicki reflected on his experience in the booth:

“Walter Jon Williams’s books are among the finest military SF I’ve ever encountered. They’ve got everything. Military action, in space and planetside, alien cultures and mores, truly evil enemies, and thick-headed bureaucrats. Even romance. Gareth Martinez and Caroline Sula, the principals, are richly textured, complex people, facing overwhelming odds in battle, as well as their own demons and vulnerabilities, in brilliantly creative ways. I’ve enjoyed my time in their company immensely.”

This is truly an author and narrator match made in (space opera) heaven! Listen to audiobook samples on Skyboat’s Dread Empire’s Fall playlist on SoundCloud.

All that is important is known. 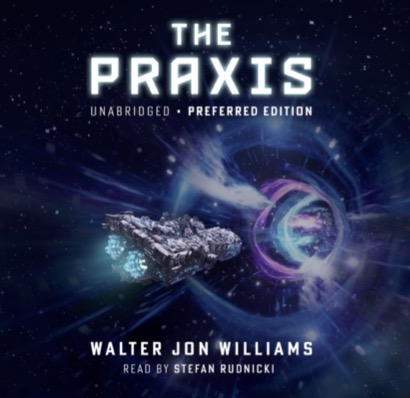 All will must bend to the perfect truth of The Praxis

For millennia, the Shaa have subjugated the universe, forcing the myriad sentient races to bow to their joyless tyranny. But the Shaa will soon be no more. The Dread Empire is in its rapidly fading twilight, and with its impending fall comes the promise of a new galactic order … and bloody chaos.

A young Terran naval officer marked by his lowly birth, Lt. Gareth Martinez is the first to recognize the insidious plot of the Naxid—the powerful, warlike insectoid society that was enslaved before all others—to replace the masters’ despotic rule with their own. Barely escaping a swarming surprise attack, Martinez and Caroline Sula, a pilot whose beautiful face conceals a deadly secret, are now the last hope for freedom for every being who ever languished in Shaa chains—as the interstellar battle begins against a merciless foe whose only perfect truth is annihilation.

Six months’ rations had seemed plenty at the time, but now he was beginning to wonder if he should reduce the number of calories the crew were consuming. And if he did that, the reproaches, both from himself and from his crew, would begin in earnest.

And so Severin avoided the glances of his crew, and counted the days.

A pity, because if they ever arrived, Severin could teach them a great deal. 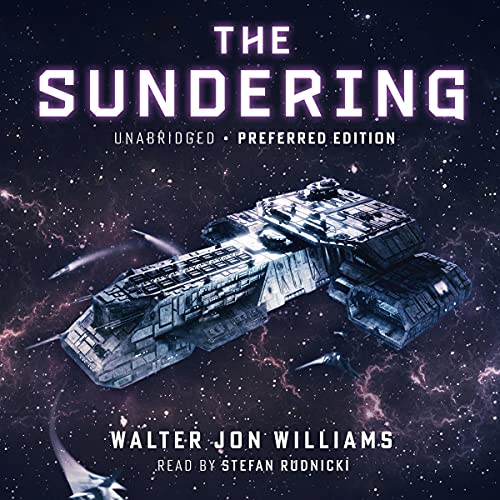 Following The Praxis, Walter Jon Williams’s critically acclaimed mix of space opera and military science fiction, the conflict grows for the fate of humanity…and the universe.

The Dread Empire of the Shaa is no more, following the death of the last oppressor. But freedom remains elusive for the myriad sentient races enslaved for 10 centuries, as an even greater terror arises. The Naxids – a powerful insectoid species themselves subjugated until the recent Shaa demise – plan to fill the vacuum with their own bloody domination and have already won a shattering victory with superior force and unimaginable cruelty. But two heroes survived the carnage at Magaria: Lord Gareth Martinez and the fiery, mysterious gun pilot Lady Caroline Sula, whose courageous exploits are becoming legend in the new history of galactic civil war. Yet their cunning, skill, and bravery may be no match for the overwhelming enemy descending upon the loyalist stronghold of Zanshaa, as the horrific battle looms that will determine the structure of the universe – and who shall live to inhabit it – for millennia to come.

Macnamara nodded. “So we’re going to keep on ﬁghting then,” he said.

The option to quit had always been there. To stay where they were and do nothing, to wait for the war to end one way or another. No one would blame them, not once their superiors had died.

“Oh yes.” Sula could feel the tension twitching in her jaw muscles. “We’re still at war. And I know just where we’re going to start.” 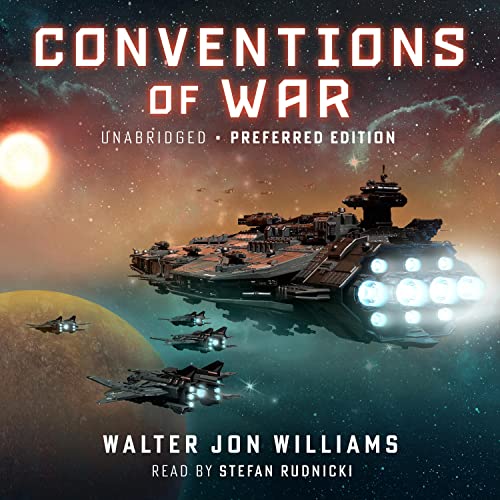 At last, the climactic final episode of the Dread Empire’s Fall trilogy – what started with The Praxis and The Sundering comes to a brilliant conclusion in Walter Jon Williams’ epic space adventure.

Working on opposite sides of the galaxy – one in deep space, the other undercover on an occupied planet – and haunted by personal ghosts, Captain Gareth Martinez and Lieutenant Lady Caroline Sula fight to save the Empire from the vicious alien Naxid. In a desperate, audacious bid to stop the Naxid fleet, Martinez makes a move that could win the war…and lose his career. Meanwhile, Sula’s guerilla tactics may not be enough to stop the Naxid – until she tries one deadly final gambit.

And now here comes THE PRAXIS TRIAD: Three novellas in the Praxis Universe that take place after the events of the DREAD EMPIRE’S FALL TRILOGY. Find out what Gareth Martinez, Caroline Sula, and some other familiar faces have been up to since CONVENTIONS OF WAR. 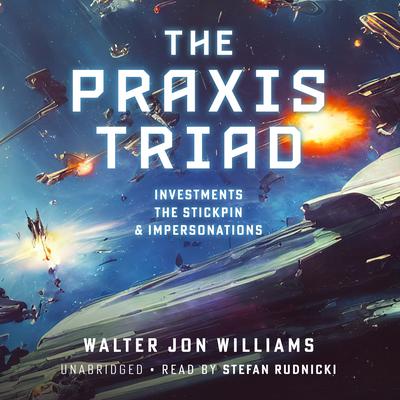 THE PRAXIS TRIAD: Investments, The Stickpin, and Impersonations by Walter Jon Williams

After bringing listeners The Dread Empires Fall Trilogy (The Praxis, The Sundering, and Conventions of War), Skyboat Media and Blackstone Publishing come together again to present The Praxis Triad, an original audiobook compilation of three novellas from Walter Jon Williams’s Praxis universe.

Investments finds Gareth Martinez unable to find a meaningful post due to the hostility of his superiors. He’s accepted a meaningless post as Inspector General of Chee, a newly settled world. Intending nothing more than a pleasant vacation with his family, he first stumbles across a murderous conspiracy, and then learns he must battle a literal cosmic menace that threatens to wipe out all life on the planet.

In The Stickpin, set in the Naxid War, Caroline Sula leads the resistance against the Naxid occupiers and shows how a pleasant afternoon stroll can have deadly consequences to the enemy.

Having offended her superiors by winning a battle without permission, Caroline Sula has been posted to the planet Earth, a dismal backwater where careers go to die. But Sula has always been fascinated by Earth history, and she plans to reward herself with a long, happy vacation amid the ancient monuments of humanity’s home world.

Sula may be an Earth history buff, but there are aspects of her own history she doesn’t want known. Exposure is threatened when an old acquaintance turns up unexpectedly. Someone seems to be forging evidence that would send her to prison. And all that is before someone tries to kill her.

If she’s going to survive, Sula has no choice but to make some history of her own.

Listen to sample here! And buy your copy today!