Two Bram Stoker audiobooks: the novel THE LADY OF THE SHROUD and the original audio collection DRACULA’S GUEST, THE CHAIN OF DESTINY, A STAR TRAP & OTHER STORIES

Abraham “Bram” Stoker (1847–1912) was an Irish novelist and short-story writer best known for his vampire novel, Dracula. His other works include The Mystery of the Sea, The Jewel of the Seven Stars, The Man, and The Lair of the White Worm.

First published in 1909, THE LADY OF THE SHROUD is an engrossing concoction of an epic steampunk adventure, military tale and science fiction romance, and has been revitalized on audio by Skyboat Media & Blackstone Publishing. 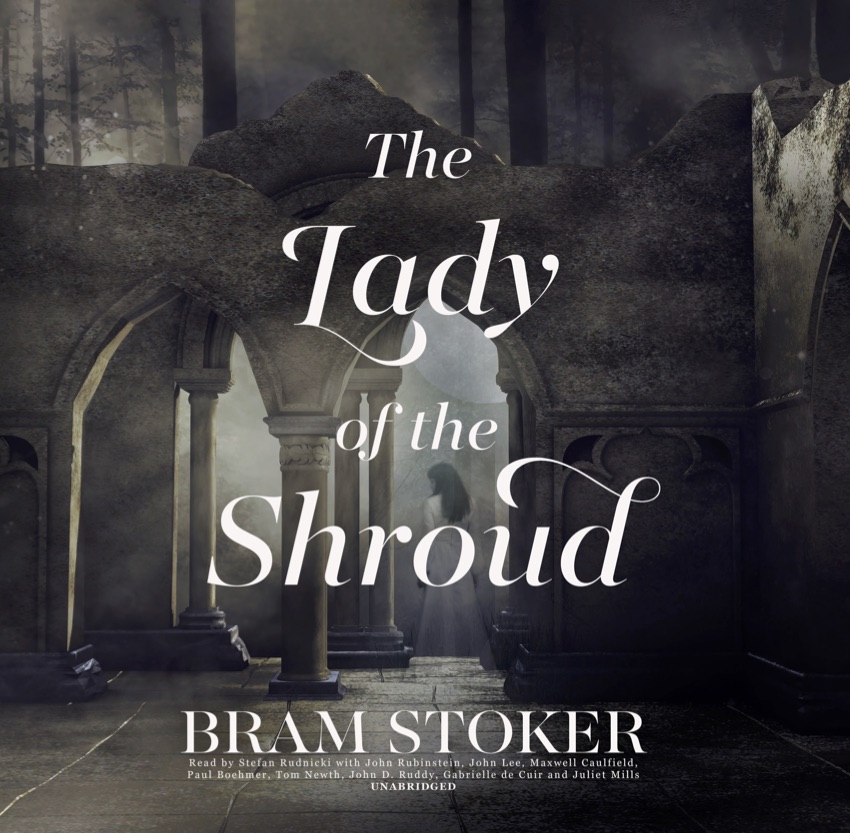 THE LADY OF THE SHROUD

Old Roger Melton has died, leaving behind one of the greatest fortunes in Europe. His arrogant relative Ernest Melton expects to be the heir, but, much to the family’s surprise, Roger leaves his vast estate to his obscure young nephew, Rupert Sent Leger. But Rupert’s newfound wealth comes with strange conditions attached, one of which is that he must inhabit the old castle of Vissarion in the remote Balkan nation known as the Land of the Blue Mountains.

Rupert, an intrepid adventurer, agrees and travels to Vissarion with his Aunt Janet, who possesses the occult power of Second Sight. But all is not as it seems at Vissarion. Rupert finds himself visited by a ghostly woman clothed in a burial shroud who sleeps in a tomb. Haunted by her strange beauty, he declares his love and they wed in an Orthodox ceremony conducted by candlelight. As a newly married couple, their trials and adventures continue. From sea battles with mechanical crabs and flying machines to insidious court plotters and spies, the newlyweds battle all manner of foe in their quest to free their country and become the ruling Voivodes of Vissarion, the Land of the Blue Mountains.

For Stoker fans looking for something more Dracula-esque, Skyboat, together with Blackstone Publishing, proudly presents DRACULA’S GUEST, THE CHAIN OF DESTINY, A STAR TRAP & OTHER STORIES, an original audio collection.

Dracula’s Guest, read by Stefan Rudnicki, tells the story of an unnamed Englishman visiting Munich before departing for Transylvania. Ignoring the warning of his hotelier to return early, the Englishman ventures out to explore an abandoned village. In this village, during a raging storm, he encounters several otherworldly beings and is unsure of the exact events of the night. Listen to a sample clip here.

Dracula’s Guest is far from the only gem in our original audiobook collection. As you can see from the title, it’s hard to know what devilishly twisted tale to spotlight when there are so many to choose from!

Gabrielle de Cuir narrates A Star Trap, in which an old man recounts the death he witnessed as a young boy working in the theater and includes plenty of romantic intrigue for good measure. Meanwhile, in The Chain of Destiny, a man named Frank is boarding at Mrs. Trevor’s home and she decides to play matchmaker between him and another boarder, Diana Fothering. While Frank has not yet met the young lady, he is assured of her beauty by means of a painting in his room that she strongly resembles. But, far from giving him pleasant dreams of wedded bliss, the painting instead infiltrates his nightmares. A haunting tale voiced by Stefan Rudnicki, and plenty more to feast your ears on from fellow narrators Paul Boehmer and Kate Orsini. Full cast details below.

DRACULA’S GUEST, THE CHAIN OF DESTINY, A STAR TRAP & OTHER STORIES 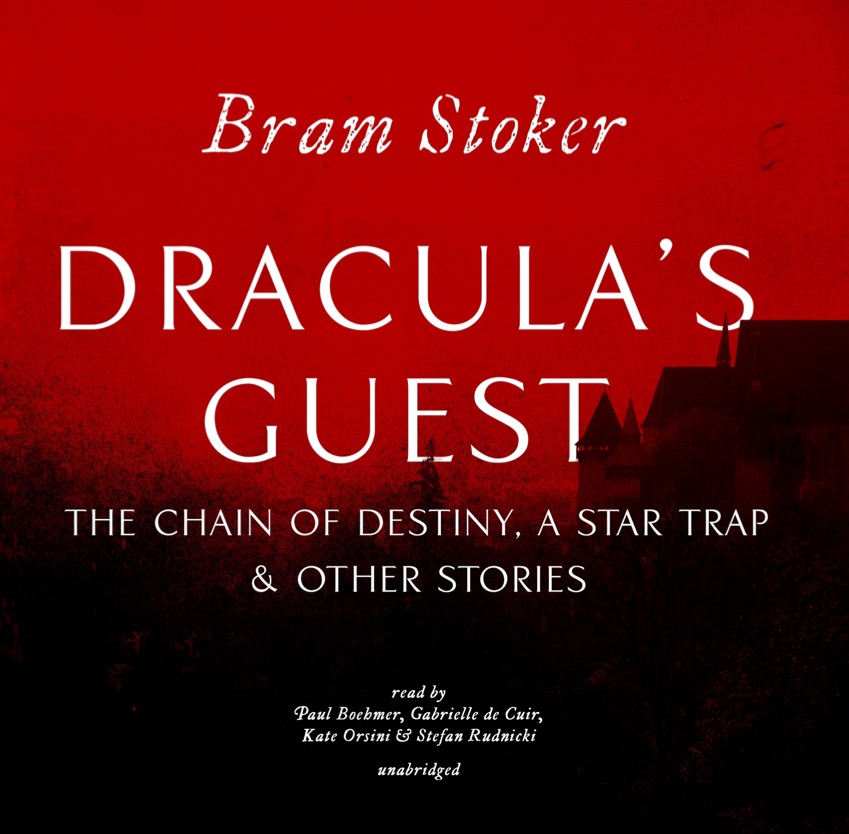 Best known for his masterpiece of horror, Dracula, Bram Stoker wrote a number of other novels and many short stories, all with supernatural themes or filled with a physical terror reminiscent of Poe.

The title story, “Dracula’s Guest”, was originally part of the great novel but was excised and published separately. The accompanying stories, such as “The Squaw”, “The Judge’s House”, and “The Burial of the Rats”, are classic tales of the macabre in their own right. From torture chambers and murderous prophecies to vengeful ghosts, these haunting stories illuminate Stoker’s mastery of horror.

The Squaw – read by Stefan Rudnicki

The Secret of the Growing Gold – read by Gabrielle de Cuir

The Coming of Abel Behenna – read by Kate Orsini

The Burial of the Rats – read by Paul Boehmer

A Dream of Red Hands – read by Stefan Rudnicki

The Chain of Destiny – read by Stefan Rudnicki

Purchase your copy of THE LADY OF THE SHROUD and DRACULA’S GUEST, THE CHAIN OF DESTINY, A STAR TRAP & OTHER STORIES today!