Skybook: THE END OF THE SENTENCE 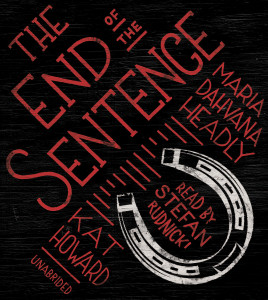 “I flipped the letter, my neck prickling, and saw one word, carefully inscribed on the back of the envelope in a kind of calligraphy, embossed with little creatures, leaves and branches:

“A deliciously creepy and atmospheric mashup of old myths and new twists, Headley and Howard’s lush, sinister novella is a guaranteed treat for fans of the fantastic.” – from Sarah McCarry’s review for Book Riot

“Sweat dropped onto the letter, blurring the ink. Yellow legal pad. I wanted to crumple it, but it seemed crazy to think I could be scared by paper. Was I scared? My heart was beating faster, but it wasn’t fear. It felt like something else.”

“This novella is as dark and rich as European drinking chocolate, both in the story it tells and in the way it’s written….Kat Howard and Maria Dahvana Headley’s separate styles blend beautifully here, as do myth and folklore, in this intricate and elegantly forged plot.” — from K. Tempest Bradford’s review for NPR. Chosen as one of NPR’s Best Books of 2014

“I was thrilled to hear they’d joined forces for The End of the Sentence, a collaboratively written novella available now from Subterranean Press—and even more thrilled upon reading it to discover that it was every bit as deliciously creepy and gorgeously terrifying as I’d hoped.” Tor.com

As we were thrilled when these two amazing authors granted us permission to publish and produce their audiobook version.

The audiobook narrated by Stefan Rudnicki, just received this rave review from the esteemed Audiofile Magazine:

Stefan Rudnicki’s full-bodied deep voice sounds like one might imagine the voice of God. So who better to narrate this tale of guilt and redemption? Rudnicki’s tone is full of sorrow and anguish when voicing Malcolm Mays, who runs away to a small Oregon town to escape a tragic accident. His new life is quickly derailed when he receives mail from Dusha Chuchoonyhoof, a town legend who claims to be the owner of Malcolm’s house. Dusha is about to be released from prison, and he expects Malcolm to perform a gory ritual to welcome him home. The novel draws on a dizzying blend of Kalapuya, Welsh, Scottish, and Norse mythology, and the listener’s bewilderment is echoed by Rudnicki’s Malcolm. The veteran narrator aids listeners by making the town’s oddball denizens distinctive and the paranormal elements clear. D.E.M. © AudioFile 2016, Portland, Maine 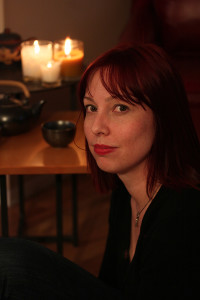 Kat Howard is the World Fantasy Award-nominated author of over 30 pieces of short fiction. She is a graduate of Clarion at UCSD and also earned a Ph.D. in English Literature. She has taught at the University of Minnesota and Stonybrook University. Her work has been performed on NPR as part of Selected Shorts, and has appeared in magazines including Lightspeed, Nightmare, Clarkesworld, and the Journal of Unlikely Cartography, and a variety of anthologies. Her debut novel, Roses and Rot, will be out in 2016 from Saga Press. 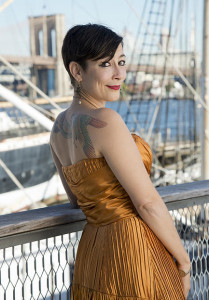 Maria Dahvana Headley is the author of the young adult sky ship fantasy Magonia (HarperCollins), the novel Queen of Kings (Dutton), the internationally bestselling memoir The Year of Yes (Hyperion). With Neil Gaiman, she’s The New York Times-bestselling co-editor of the anthology Unnatural Creatures (HarperCollins) benefitting 826DC. Her Nebula and Shirley Jackson Award-nominated short fiction has recently appeared at Uncanny Magazine, Tor.com, Lightspeed, Nightmare, Clarkesworld, Shimmer, Apex, Subterranean Online, The Lowest Heaven, The Book of the Dead, and many more. She grew up in rural Idaho on a survivalist sled-dog ranch and now lives in Brooklyn. Her new adult novel THE MERE WIFE is set for a 2017 release by Farrar, Straus, & Giroux, and a sequel to MAGONIA will be released in 2016.