THE CITY ON THE EDGE OF FOREVER FULL CAST LIST The Strange Birth, Short Life, and Sudden Death of Justice Girl

THE SWARM: Volume One of the Second Formic War

Authors Orson Scott Card and Aaron Johnston return to their Ender’s Game prequel series with this first volume of an all-new trilogy about the Second Formic War in The Swarm. 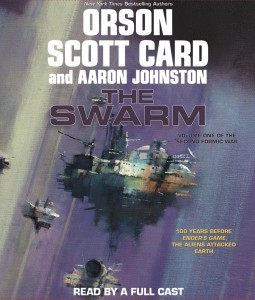 Colonization of new worlds always brought challenges that required improvisation, but now for the first time a Formic colony was encountering friction that was intelligent, organized, and effective.  However, if there was one thing the Hive Queens were experts at, it was war.-Demosthenes, A History of the Formic Wars, Vol. 3.

We’re very proud to welcome back the acclaimed audiobook cast of the First Formic Wars series:  Earth Unaware, Earth Afire, and Earth Awakens.  And to introduce some new voices into the fold including authors Orson Scott Card and Aaron Johnston.