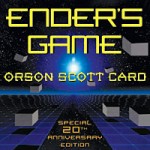 This Hugo and Nebula Award-winning novel is given award- winning treatment as an audiobook. Stefan Rudnicki’s resonant voice provides the main narration, while others are used when the point of view shifts from that of Ender Wiggin, a brilliant boy who is mankind’s hope of surviving war with an alien race. Short conversations precede every chapter of the novel.

The war with the Buggers has been raging for a hundred years, and the quest for the perfect general has been underway for almost as long. Enter Andrew “Ender” Wiggin, the result of decades of genetic experimentation.

Is Ender the general Earth so desperately needs? The only way to find out is to throw him into ever-harsher training at Battle School, to chip away and find the diamond inside, or destroy him utterly. Ender Wiggin is six years old when his training begins. He will grow up fast.

But Ender is not the only result of the experiment. His two older siblings, Peter and Valentine, are every bit as unusual as he is, but in very different ways. Among the three of them lie the abilities to remake a world. If, that is, the world survives.

This Special 20th Anniversary Edition of the Hugo and Nebula Award-winning classic is now digitally remastered with a full cast production. It also contains an exclusive bonus: an original postscript written and recorded by the author himself, Orson Scott Card!