Series Spotlight: Cozy up with Edie Claire Louisa May Alcott’s Dark Side: A WHISPER IN THE DARK & PAULINE’S PASSION AND PUNISHMENT 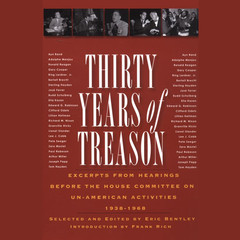 THIRTY YEARS OF TREASON: From the Hearings before the House Committee on Un-American Activities

Sometimes a very special work comes along, that transcends the usual audiobook hoopla, and moves into the realm of vital social importance. This falls into the latter category.

We have been passionate about this work for over a decade. Bentley was Stefan’s professor, and since the late 90s, we have been trying to get this published. With the generous help of Blackstone Audio, we are now finally bringing these words to life on audio. We have proven to the world we can make a “quiet” audiobook; well, this is a “noisy” audiobook.  We opened the doors in Studio A here at Skyboat, cranked up several microphones, and went to town. We wanted the actors to be able to play off of each other, and to accomplish this massive work (over 40 hours of dialogue) on our budget, we threw caution to the wind and let the actors tear into this fascinating and chilling text.

The result is three volumes of reenactments and commentary from the Federal government’s anti-Communist investigations by a full cast.

Originally established in 1938, the standing House Committee on Un-American Activities (HUAC) was an investigative committee of the U.S. House of Representatives. While initially charged with investigating domestic fascist groups, it rapidly became a soapbox from which New Deal programs were denounced and real and imagined communist subversives were routed out.

As Victor Navasky states in The New York Times, “…what [Bentley] has done is give us HUAC as spectacle, and the perspective is shattering.”

And Bentley is just the man to do it. Eric Bentley is a British-born American critic, playwright, editor, and translator known for being one of the preeminent scholars of Bertolt Brecht. Now in his nineties (check out his 94th Birthday Bash), Bentley lives in New York City and continues to be active in the literary community. He taught for many years at Columbia and Harvard Universities, which is where he first crossed paths with a student named Stefan Rudnicki. Now, all these years later, Stefan sought to revisit their connection by producing Bentley’s one-of-a-kind tome.

In addition to Bertolt Brecht, Volume 1: 1938-1948 includes the testimonies of Ayn Rand, Adolphe Menjou, Robert Taylor, Ronald Reagan, Gary Cooper, Hallie Flanagan and many others. This is NOT your typical audiobook; this is a period of American history recreated, a trip back in time, straight into the gavel-banging, paper-shuffling courtroom of the era, complete with spirited argument, testimony, and objections. “HUAC as spectacle” – sounds like we need some big personalities. Enter Orson Scott Card. Harlan Ellison. Gabrielle de Cuir. John Rubinstein. Richard McGonagle. Alex Hyde-White. Coleen Marlo. Stefan Rudnicki. The result? Passionate performances that will engross today’s listeners just as these trials captivated the public eighty years ago.

30 Years of Treason creates living history from the documentary record and serves as a warning for the future. We must never forget. We do not want this chapter in history to repeat itself. We listen and we remember.

Keep checking back with us as we begin our WITNESS SPOTLIGHT SERIES, featuring the personages who figured in this drama, and our amazing full cast of actors authors and thinkers who bring them to life again.