JUNE 7: ADDISON HOWELL AND THE CLOCKROACH 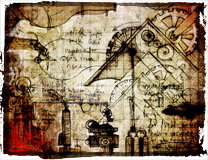 “Addison Howell didn’t so much arrive in the town of Humptulips as appear there sometime around 1875.  He had money, which set him apart from everybody else—because everybody else was working for the logging company, and mostly they didn’t have a pot to piss in, as my Daddy put it.”

So begins Cherie Priest’s delightful story, ADDISON HOWELL AND THE CLOCKROACH, in which three differing points of view flesh out the tale of the mysterious Addison Howell and whatever strange contraption he was building outside town: “Word got around that he was building a machine that looked like a big bug, or a lobster, or something.  It had a big stack on top and it was steam powered, or coal powered, or anyway it was supposed to move around when he was sitting inside it.”

Audie Award winning narrator Emily Rankin moves effortlessly from townswoman with a twang to prim historian to informational museum exhibit, subtly changing her approach to fit the telling.  The result is a marvelous listen of a strange little history of a man called Addison Howell.  Listen to the story below, then read Lightspeed‘s Author Spotlight on Cherie Priest to read more about what she calls “narrative wiggle room.”

ADDISON HOWELL AND THE CLOCKROACH AUDIO

Cherie Priest is the author of a dozen novels, including the steampunk pulp adventures Ganymede, Dreadnought, Clementine, and Boneshaker.  Boneshaker was nominated for both the Hugo Award and the Nebula Award; it was a PNBA Award winner, and winner of the Locus Award for Best Science Fiction Novel.  Cherie’s short stories and nonfiction articles have appeared in such fine publications as Weird Tales, Publishers Weekly, and numerous anthologies.  She lives in Chattanooga, TN, with her husband, a big shaggy dog, and a fat black cat. 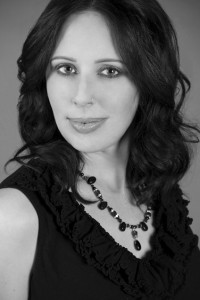 Emily Rankin (neé Emily Janice Card) is a stunning talent in this business.  Emily began her audiobook career with Skyboat, working as a director with Stefan.  Her narrating talents soon became apparent to us, and now, to the whole world!  She is an actor, singer, and writer from North Carolina.  On screen, she’s appeared in Skyboat’s The Delivery.  Her stage work includes The Importance of Being Earnest, Bye Bye Birdie, The Fantasticks, and Once Upon a Mattress.  She has read dozens of audiobooks, including Orson Scott Card’s Ender in Exile, The Lost Summer of Louisa May Alcott by Kelly O’Connor McNees, for which she was awarded the 2010 Best Voice in Fiction from AudioFile Magazine, and The Age of Miracles by Karen Thompson Walker, for which she won a 2013 Audie for Best Science Fiction.