JUNE 16: BREAKING THE FRAME JUNE 18: THE TASTE OF STARLIGHT 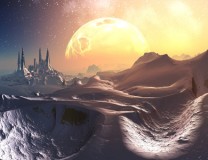 The Parsec Awards have been recognizing greatness in science fiction podcasts and podcast novels since 2006, and in 2011 the honor of Best Speculative Fiction Story (Short Form) went to Maggie Clark for SAYING THE NAMES, published of course, in Lightspeed Magazine.  And rest assured that the winning tale lives up to the honor:

“On the shuttle out to our connecting flight, the Bo assigned to my mission fixes the bulge of his eyes unwaveringly upon me.  I was told to expect this, the species so alien to death it finds our every parting curious; its sense of privacy so absent, not one of its forty-three languages contains the word.

“Though L-drive allows us to return long before our loved ones pass on, just the thought of my journey’s purpose already has me pining for home: of all the ways I’ve imagined meeting my father, as defense council in his murder trial does not rank high on the list.  Our shuttle crests the white round of the L-ship’s hull, powering down non-essentials while preparing to dock.

“I can bear the Bo’s steady gaze even less in the dark.”

So begins this story in which a girl, Nia, must travel to an alien world to represent a father she has never known.  The plot could be something pulled from a Blockbuster movie, but the depth and imagination that Clark brings to the table is decidedly her own.  The details of the Bo—singing, morphing aliens deeply offended by, of all things, brevity—are strange and wondrous, and the world will continue to cling to you like Bo tentacles long after the final sentence is heard, particularly because of Emily Janice Card’s beautiful narration.  Card brings a certain youthfulness to the tale, peppered with equal parts anger and hope.  Listen to the story below, then read yet another terrific Author Spotlight to learn how the main inspiration for this story was, of all things, Twitter.

Maggie Clark is a doctoral student at Wilfrid Laurier University.  She’s been published for poetry and fiction, with science fiction appearing to date at Lightspeed and Daily Science Fiction.  Her first science fiction story, “Saying the Names,” won a 2011 Parsec Award. 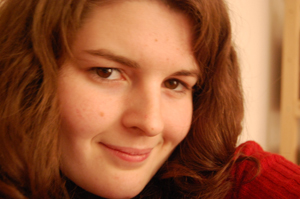 Emily Rankin (neé Emily Janice Card) is an actor, singer, and writer from North Carolina.  On screen, she’s appeared in Skyboat’s The Delivery.  Her stage work includes The Importance of Being Earnest, Bye Bye Birdie, The Fantasticks, and Once Upon a Mattress.  She began her audiobook career with Skyboat, working as a director with Stefan.  Since then, she’s read dozens of audiobooks, including Orson Scott Card’s Ender in Exile, The Lost Summer of Louisa May Alcott by Kelly O’Connor McNees, for which she was awarded the 2010 Best Voice in Fiction from AudioFile Magazine, and The Age of Miracles by Karen Thompson Walker, for which she won a 2013 Audie for Best Science Fiction.
Share →
Tweet