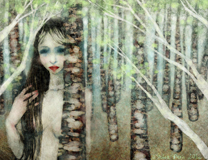 We’re halfway through audiobook month!  How time flies listening to these amazing stories.

In BREAKING THE FRAME by Kat Howard, a woman named Francesca is asked by a photographer to be his model.  “She said yes.  Of course she said yes.  There are no stories when people say no.”  Francesca becomes Vaughn’s muse and model, losing herself in nature—both figuratively and literally—until there is essentially nothing left.  Or there is something left.  It’s just not what was there before.

Narrator Stefan Rudnicki brings a soft and mysterious tone to this story that blurs the line between art imitating life and life imitating art.  Hear it for yourself below, then click on Lightspeed Magazine‘s Author Spotlight to learn more about the real-life photographer whose work inspired this haunting tale.

Kat Howard’s short fiction has appeared in Apex, Subterranean, and previously in Lightspeed.  She is the content editor at Fantasy-Matters.com, and spends far too much time on twitter as @KatWithSword. 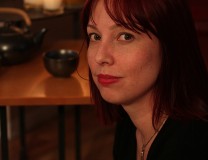