Ahhh, the weekend!  While our cast and crew enjoy a brief respite from the long but incredibly fun hours of recording, we’re taking stock of week one.  We’ve got plenty to sift through and organize, and obviously when we use the words “sift through” and “organize,” what we really mean is “ooh” and “aah.”  We just can’t wait for the world to hear what we’ve been hearing these last few days.  While there’s always plenty of talk of call times and retweets and pick-ups and contracts and who’s gonna order the lunch?, there’s even more of stopping dead in your tracks to listen to a scene and getting so lost in what you hear that you literally forget where you are and that list of ten things you are supposed to be doing.  Seriously.  Just between us?  This audioplay is going to be incredible.  IN-CRED-I-BLE.  And not just because we’re biased.  Because it just is.

I mean, just look at these guys… 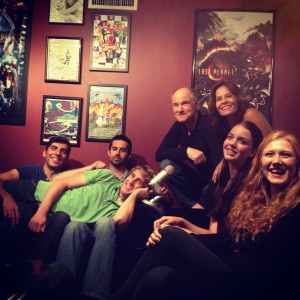 We spent Friday morning finishing up the last scenes of the jeesh, and once that was all wrapped, the afternoon came in like a summer storm on a hot day.  Oscar-nominated actress (not to mention Golden Globe winner) Samantha Eggar joined us to play Orson Scott Card’s brand new character created especially for this audioplay (our lips are sealed), stepping into the booth with the great Richard McGonagle, who flew in from Maine to take on none other than Mazer Rackam.  Our own Stefan Rudnicki stepped away from the producer’s bench to record a couple of scenes as Colonel Graff, and the three of these heavyweights in the booth together was the audio equivalent to pouring maple syrup over a steaming plate of pancakes.  With butter melting.  And fresh fruit.  And whipped cream. And birds chirping outside.  And hot coffee.

In other words, we’ll just use one: INCREDIBLE!

C’mon, you guys.  It’s the weekend.  Are you still sleepy?  Maybe this will wake you up.  Our director, Gabrielle de Cuir, finds that it works wonders as a morning warm-up for the cast.

And just because it’s Saturday doesn’t mean the coverage stops!  Keep following us on Twitter, Facebook, and YouTube for the latest of our EGAD videos!  More are on the way!