IN THE STUDIO: STEFAN AND THE STORY OF CIVILIZATION

Every now and then, a real doozy shows up on the doorstep, or in this case, perhaps we should say doorstop, because boy is this script thick.  Look up “doozy.” It’s a good thing. This one from our beloved Blackstone Audio. Nonetheless, Stefan is thrilled to be reading from none other than THE STORY OF CIVILIZATION, the iconic, eleven-volume set of Western history penned by husband and wife writing team Will and Ariel Durant. 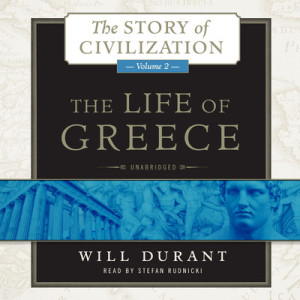 This week, Stefan began tackling Volume 2: THE LIFE OF GREECE, originally published in 1939, and considering the fact that the ol’ Greeks are credited with inventing drama as we know it, it probably won’t surprise you to know that we are pretty partial to the Greeks around here. (Hint, hint: Drama is a rather important ingredient in books, or good ones anyway, and good books are rather essential when you’re in the business of recording them.) Plus, Stefan’s directing a one man show called Socrates Now, starring Yannis Simonides, next spring with L.A. and Off-Broadway runs planned. Stay tuned for more on that production.

Enjoy a sneak peek into the studio above in which Stefan sheds life on the famously sensuous poetess, Sappho of Lesbos.

And if you need us, we’ll be neck-deep in a variety of pronunciation keys trying to make sure that every syllable of this tome is read right. It’s only 754 pages. No biggie.