According to every Knight he’d spoken to, only men had ever been Knights, and only men could ever be Knights.  The order had records going back two millenia that clearly showed Knights had only ever been male.

Well, they were wrong. Meet the first female Knight ever.  Spirit Knight, that is. 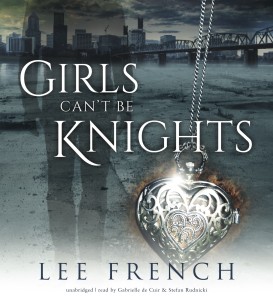 In GIRLS CAN’T BE KNIGHTS, we meet Claire, a teenager who’s already had a rough time in life. Her father’s death left her with an empty locket and six difficult years in foster care.  Things are finally looking up when she encounters Justin, a Spirit Knight on his (sarcastic) white horse, Tariel.  He offers her a ride home.  When Claire says she doesn’t have a home, Justin’s family takes her into theirs.

As a Spirit Knight, Justin is part of a brotherhood who’s job it is to hunt dangerous ghosts (known as Phasms) who devour the living.  The signs point to the fact that Claire is a Spirit Knight too.  The problem is that it’s always been a boys’ club. Girls can’t be Knights, can they?  Sure they can.  Some people in the order just need convincing.  Especially Djembe. He’d rather think Claire’s a witch who infiltrated the order.  Claire could easily deal with this if Djembe didn’t try to convince a bunch of Knights to try to execute her.

She had a lot on her mind.  Between having dealt with her father’s ghost, worrying about other Spirit Knights who’d rejected her for her gender, and starting over at yet another high school, she’d spent half of the past month wishing she could crawl into a hole.

No one said being a Spirit Knight was easy. 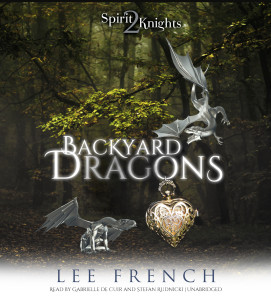 In BACKYARD DRAGONS, Claire wants to know everything about being a Spirit Knight as soon as she possibly can.  Now that she finally has her own sprite (soul-bonded companion), no one can call her a fake anymore.  He’s a small dragon named Enion.

Justin continues to train Claire in being a Spirit Knight, but having an apprentice isn’t easy.  Especially with all of the other demands on him.  Aside from his demanding young daughters, he just lost his own mentor. Sometimes, he’d like to just be a Knight and that’s it.  Together, Justin and Claire face ghosts, dragons, witches, and memories.  Just another day in the life of a Spirit Knight.

“It’s not him,” Claire breathed.  The thought sent a shiver down her spine.  Even though Justin outclassed her, she and Enion might be able to get the better of him through luck or cleverness,  But she had no idea what to expect from an unknown thing wearing a Justin suit. 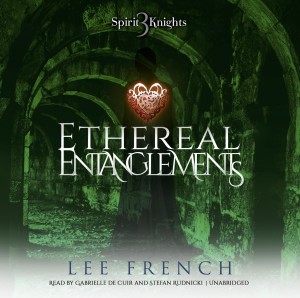 In ETHEREAL ENTANGLEMENTS, Claire has finally been accepted into the Spirit Knight order.  However, that doesn’t mean that everyone thinks she belongs there.  She’s forced into a test to prove her worthiness and ends up discovering more than she (or anyone else) wants her to know.  For example, the order’s founder, Caius, may not be what everyone thinks.

Claire thinks she knows what she must do to save the world from the plague of ghosts the Spirit Knights have left behind.  What if she’s wrong?

Claire touched its own arm as it formed. White mist formed flesh.  Fabric covered it. Everything felt cool and soft, but its cloud offered resistance.  “What am I?” 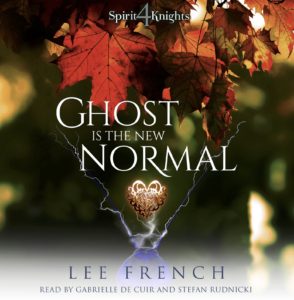 In GHOST IS THE NEW NORMAL, Claire now has to face eternity as a sixteen year old.  It’s quite a different matter dealing with the whole ghost thing from the other side.  Death didn’t solve anything for Claire.

And what about Drew?  How do you deal with the loss of your best friend?  Can you trust the guidance of the ghost that’s possessing you? Should you?

And then there are the giant cockroaches…

It’s just another day in Portland.

Riding a dragon around the city proved far less enjoyable than Claire expected.  Brief bursts of euphoric flight punctuated long rambles through dead, empty graveyards.  Handfuls of people pointed at her and Enion along the way.  She followed Justin’s example and waved to them like some kind of hero.

Had any of them come to mourn people killed by the giant mutant bugs she’d accidentally unleashed on the city?  She hoped not.

In BOYS CAN’T BE WITCHES, Claire expects Christmas vacation to be just that, a vacation.  No thinking, doing or obeying.  Just sleeping in and playing with dragons, right?  Wrong.

And then there’s Drew.  When you have magic, why can’t it finish high school for you?  He can crush mutant bugs with his mind, so who needs to learn math and English? Unfortunately for Drew, he can’t do much more than crush mutant bugs until he gets off his butt and learns to use magic properly.

In this fifth and final installment of THE SPIRIT KNIGHTS SERIES, Claire and Drew find out what happens they spend three weeks trying to live a “normal” life and ignore the obligations of the power at their command.

Purchase of your copies of GIRLS CAN’T BE KNIGHTS, BACKYARD DRAGONS, ETHEREAL ENTANGLEMENTS, GHOST IS THE NEW NORMAL, and BOYS CAN’T BE WITCHES today.

Take a listen to THE MAZE BESET TRILOGY:  DRAGONS IN PIECES, DRAGONS IN CHAINS, and DRAGONS IN FLIGHT. Available on downpour.com.