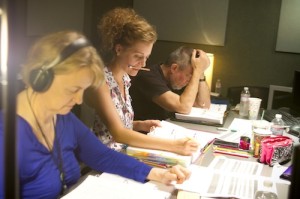 The trifecta at work.

Today was all about the Launchies.  They experienced zero-gee, fought over top bunks, met their new mommy Dap, and learned how to freeze each other in the Battle Room.  And once they stepped out of the booth and into our very own mess hall, they ate cold cut sandwiches and chocolate chip cookies as if they were all still in character!  (We production folks aren’t too far from the adults in Ender’s World: always manipulating, always watching!  {insert maniacal laughter here} 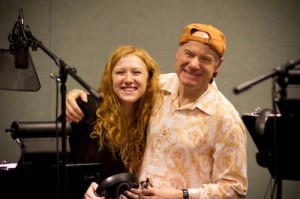 We had such an incredible group today, it’s difficult to name them all, but heck, we’re too proud and excited not to.  We had father-daughter team Jim Meskimen and Taylor Meskimen as Ender’s only enemy and friend, respectively.  In other words, Jim kept calling Taylor a butt-wiggling worm in a French accent, but don’t worry, Ender helped Taylor—we mean, Shen—get her revenge.  (Who’s a butt watcher now, Bernard?!)  The fabulous Lisa Renee Pitts took several stunning accents for strolls through classrooms and the Caribbean; Roxanne Hernandez wowed us with her animatronic drone and her punchy Petra; Sunil Malhotra played up meanie Stilson and the wise Alai; and Christian Rummel wowed us all with his Bonzo-inflected Spanish.  Kirby Heyborne continued as the heart of the story, warming our own as he found his confidence where his classmates lost their footing (Take that, Bernard!).  And our seemingly never-ending chorus of boys, girls, players, and launchies was made whole by the versatile voices of Kelly Catey, Alison Bews, and Judy Bews (That’s right, folks; this time it’s a mother-daughter team. Show business is a family business, right?!).

Luckily, we had a few grown-ups to keep the littluns in order.  CSI Miami star Rex Linn got his newbies in line as Dap, the good ol’ den mother from the south.  Musical legend Janis Ian took on a Russian accent that made us all giggle.  And Stefan Rudnicki stepped away from his role as producer to give voice to the iconic General Graff. 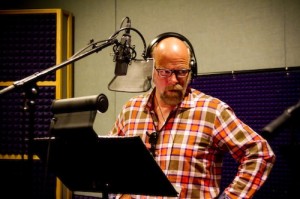 Rex Linn at the mic; Photo by Alex Linares

And boy, isn’t it time to give a little shout out to the team of three that keep this whole battleship flying?  The photo at the top just kinda says it all: Gabrielle de Cuir, Director Extraordinaire, doing what she does best, listening; Cassandra de Cuir, Script Supervisor, boggling all our minds with her intricate system of colored pencils; and Stefan Rudnicki, Producer, in classic producer pose.

If you missed details on yesterday, click here.  And tomorrow is another day.  As always, continue to follow us @SkyboatMedia for the latest videos and updates!