As the release of ENDER’S GAME ALIVE grows closer and closer, we thought it might be nice to begin shining the light on some of our talented cast members so that you might get to know exactly who these talented folks are before you hear them bring their characters to life.  And of course, where else could we possibly begin but with Ender? 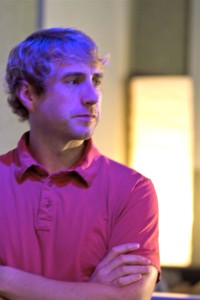 One of the biggest challenges of this audioplay was casting the “children.”  There were endless table reads and late night discussions to help decide on the correct approach to capturing the characters’ innocence, yet fully performing the sophisticated dialogue.  Although the children who auditioned were adorable and very talented, they simply could not tackle Card’s very “grown-up” dialogue.  Hence, we cast EGA by matching the best actor to each role, based on temperament and talent, and on his or her ability to fully realize the author’s intent, whether the actor was 15 or 67.

Ender is a monumental role in this production; he is the backbone of this drama.  We are honored to have Kirby Heyborne in this iconic role.  The scope of Kirby’s emotional and intellectual range in this audioplay is nothing short of astounding.  He manages to be vulnerable, funny, and a true hero.  He jumped from scene to scene (out of sequence) with clarity and never a missed step.  He does it all here.  And does it splendidly.

Kirby Heyborne is something of a Renaissance Man. Not only did he wow us day in and day out on the set of EGA, never flagging in his energy or commitment despite several hour stretches in the booth, but he was also a delight to be around when he found a moment for a rare break.  He was always the first to ask how your day was, to help gathering plates after lunch, to volunteer to do some extra funny behind-the-scenes stuff for an iPhone camera.  Kirby may have played the absolute lead in our audioplay, but you’d be hard-pressed to tell from his endless kindness and generosity.

Below is a clip of Kirby in session for EGA with Scott Brick.  Just to whet your appetites.

Fun fact: EGA Director Gabrielle de Cuir actually directed Kirby in the recording of his very first non-YA audiobook, so that made casting him all the more special.

By now Kirby has narrated more than a hundred books, including the best-selling Black Swan Green by David Mitchell and the soon-to-be-best-selling biography of Jim Henson, written by Brian Jay Jones.  Kirby has appeared onscreen as well: he was as charming in the Farrelly brothers’ The Three Stooges as he was in the award-winning boy-band mockumentary, The Sons of Provo.  Additionally, he’s starred in several plays, he’s a co-founding member of the hilariously funny improv comedy group The Society, and he’s been cast in several national commercials—maybe you remember him from that adorable Honda spot with Mario Andretti?  Not to mention the fact that he made us giggle on the set of EGA.  See why below.

And did we mention that he’s also a musician?  (We weren’t kidding when we said Renaissance.)  Kirby has released five successful albums, the latest of which is “The Elm Tree,” a beautiful collection of heartfelt, acoustic folk-pop songs.  He has said that much of his music is inspired by his wife and children because yep, he’s a dedicated family man to boot.  He even has a puppy.  Swoon.

All we can really say in conclusion is that we’re honored to have such an incredible talent as the lead in our production.  We believe that this audioplay is going to be amazing, and that is in no small part thanks to Kirby.  So thank you, Kirby!