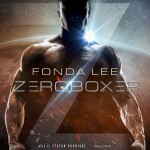 Lee's debut novel is an intense, smart, and action-packed read.

What do you get when you mix zero gravity, mixed martial arts, and science fiction? You get ZEROBOXER, the exciting debut novel from Fonda Lee.

In the weightless combat sport of zeroboxing, Carr “the Raptor” Luka dreams of winning the championship title.  Recognizing the rising star in their midst, the Zero Gravity Fighting Association assigns Carr his own brandhelm (or personal marketing strategist) named Risha. As his fame grows, Carr becomes an inspirational hero on the once-great planet of Earth.  When he discovers a far-reaching criminal scheme, Carr also becomes a secret-keeper. Whatever choices he makes will not only jeopardize everything he cares about, but they could also spill the violence from the sports arena into the solar system.

“Carr stood, shaking out his limbs and reaching for his warm-up clothes.  He didn’t need to be reminded of the stakes.  He’d been on the city space station for a year and a half.  This sixth and final fight in his contract would determine whether he landed a new deal or found himself on the next flight back to Earth, relegated to fighting in orbital dives reeking of pot, where the vacuum plumbing regularly gave out and big bubbles of pee floated in the bathrooms.

He made a face; not about to happen.  He was no planet rat.”

Fonda Lee has created what Kirkus calls “a superior sci-fi outing that doesn’t need mad scientists to provide suspense. ” Finally, a book that combines sports and sci-fi. With award-winning narrator Stefan Rudnicki to guide you through the journey, how can you lose?