SUNDERED: The Return of the Elves, Book #2 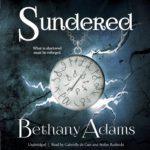 Lyr, Kai, and Arlyn return in SUNDERED, the second installment of THE RETURN OF THE ELVES fantasy series by Bethany Adams.  They are joined by some new characters as well.

Meli is considered a failure in her world of Alfheim.  She’s close to being declared an Unfavorable One, a person without useful magic.  No one can understand why the king is sending her of all people to lead an expedition through the Veil.  It’s her job to lead the Ambassador through the sick, poisonous energy that’s flooding the closely connecting realms of the fae.

Lyr wonders the same thing.  Why have Meli and the reclusive Norse elves of Alheim come?  Since Moranaia is the only land that seems to be unaffected by this energy, he has to wonder if one of his own people is behind it.  Not only that, he’s surprised that Meli may be a possible soulbonded.  Is that even possible since he’d already lost his previous love?  With the spread of this toxic energy, can he even take the time to find out if Meli is another soulbonded?

Purchase your copy of SUNDERED today.

If you’d like to know how it all started, listen to SOULBOUND, also available on downpour.com.