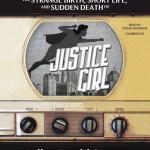 A great take on what it must have been like to be in the business during those formative years, when anything was possible.

That’s the catchphrase that’s sweeping the nation. Uttered by, who else? Justice Girl.

Award-winning writer/director Julian David Stone and narrator Stefan Rudnicki take us through the early chaotic days of television in  THE STRANGE BIRTH, SHORT LIFE, AND SUDDEN DEATH OF JUSTICE GIRL.

It’s 1955. Jonny Dirby is a writer for a popular sketch show during America’s golden age of live television. Having just been fired (blacklisted), he takes his revenge the way any television writer would…by altering a script right before it goes on the air. What started off as deliberate sabotage of a Superman lampoon, becomes a national phenomenon.   Justice Girl and her catchphrase become all the rage. She even gets her own show.

Enjoy this romp through the early days of television, when it established itself as a major influence. Both for entertainment and as the maker and destroyer of lives and careers.