THE SHEEP LOOK UP by John Brunner 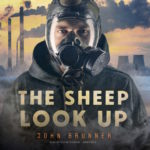 An arresting diary of what's in store for us.

Imagine a world where the air pollution is so bad that people regularly wear gas masks and the water is undrinkable…unless you’re poor, of course.  Then, you have no choice.

Imagine a world where the infant mortality rate is soaring, new diseases and health conditions are cropping up.

Imagine a world where giant corporations are fighting over how to profit from all of these terrible things while towering over an ineffectual and corrupt government.

Well, John Brunner did imagine just those things… back in 1972.

In THE SHEEP LOOK UP, environmentalist Austin Train is on the run.  He’s looking just to survive, but the government wants him dead, a group of violent environmental activists (known as “trainites”) want him to lead their movement.  The media, who always loves a good show, want him for his entertainment value.

Narrator Stefan Rudnicki brings this prophetic vision of a dystopian future to life in this Nebula Award finalist.