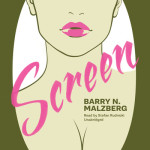 Malzberg’s books, in their tortured self-awareness, are primarily about writing: its technical difficulties and moral pitfalls, its potential to cheapen or calcify, its temptation to fraudulence or ventriloquism, the insisted-on inadequacy of language as an excuse for not being a less recursive or less involuted writer, and so on.

Barry N. Malzberg’s daring and controversial debut novel SCREEN is about a man who can only obtain sexual satisfaction by projecting himself into fantasies evoked by the cinema.

In the tradition of Vladimir Nabokov, Malzberg draws his readers over the precipice of rationality into a realm where dreams are real—a realm in which the hero, a humble investigator for the New York City Welfare Department, finds himself married to Sophia Loren, seducing Elizabeth Taylor, and seduced by Brigitte Bardot—all in one tortured weekend. –downpour.com

Barry N. Malzberg is an American writer and editor, mostly of science fiction and fantasy, though he has a long history of crossing genres.  An insanely prolific writer, he has published dozens of novels and several collections in a multitude of genres under a variety of names. He is also, let’s not forget, a classical violinist. (And, don’t worry, SCREEN is not the only title in the SkyBooks canon. Check out OVERLAY.)

Narrator Stefan Rudnicki has been a big fan of Malzberg for years and he was extra excited for this particular book. He studied up, listening to old audio clips of Loren and the like. We think he pulled it off pretty spectacularly. Purchase your copy today and let us know if you agree!