Pauline’s Passion and Punishment, and Other Escapades 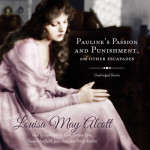 [Alcott] is brilliant, witty, has remarkable descriptive powers, and is as eminently successful in collating the sympathies of the reader as almost any writer that we now have.

Hmm, doesn’t sound like your typical Alcott quote, does it?  Louisa May Alcott (1832-1888) is, of course, best known for her beloved classic Little Women, which chronicles the lives of four sisters as they traverse the boundary from childhood to womanhood.  (And it’s certainly beloved – Alcott’s home, where Little Women was written and set, is even on Twitter!)  Writing under the pseudonym A. M. Barnard, however, Alcott wrote a series of what she termed “blood and thunder” thrillers for a weekly pulp magazine.  Pauline’s Passion and Punishment, and Other Escapades brings together five of these wicked tales.

In “A Perilous Play,” narrated by iconic singer-songwriter Janis Ian, a group of women have a picnic on the banks of a harbor island. What sounds like an idyllic and innocent activity becomes the center of drama, romance, and scandalous events involving hashish-laced sweets.

HEAR IT FOR YOURSELF TODAY!