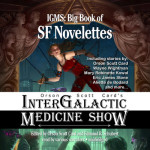 "IGMS...features newcomers and veterans alike, and is a showcase for the quality stories over at the IGMS website. Highly recommended as you'll probably be reading stories from the future heavy weights of the SF/Fantasy genre."

Orson Scott Card established his award-winning online magazine, the InterGalactic Medicine Show, in 2005, and it’s served as a haven for the oft-overlooked “novelette” ever since. Falling somewhere between novel and short story, this unique form of storytelling is particularly powerful, and now the best of the best are available in one place: InterGalactic Medicine Show: Big Book of SF Novelettes.

And to top that, now you can listen to these incredible tales of endless possibilities, ranging from alternate histories and futures, artificial intelligence, alien encounters, and lunar racetracks. This anthology is read by a group of award-winning narrators: Stefan Rudnicki (the original voice of Ender), Gabrielle de Cuir, Paul Boehmer, Arthur Morey, Roxanne Hernandez, and Card’s daughter, Emily Rankin, all of whom are part of the ENDER’S GAME ALIVE cast and are thrilled to be “back in action” on another of Orson Scott Card’s projects. And let’s not forget Card himself, who narrates one of his own pieces.

Don’t forget to buy yourself a copy from Downpour.com today!

“Under the Shield” by Stephen Kotowych, read by Stefan Rudnicki

“The Curse of Sally Tincakes” by Brad R. Torgersen, read by Emily Rankin

“The Absence of Stars” by Greg Siewert, read by Arthur Morey

“When I Kissed the Learned Astronomer” by Jamie Todd Rubin, read by Paul Boehmer

“Tabloid Reporter to the Stars” by Eric James Stone, read by Stefan Rudnicki

Edited, mixed and mastered by Ted Scott at 50 Nugget Wash