Night Ride, and Other Journeys 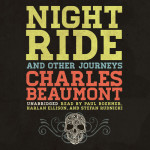 “When I think of Beaumont’s prose, I think of felicity of language; it’s very fluent, very precise, very clear, extremely readable. There is a signature.”

Stories from a master of speculative fiction…

Originally published in 1960, NIGHT RIDE, AND OTHER JOURNEYS was Charles Beaumont’s third collection of stories. It includes one of his most famous tales, “The Howling Man,” which Beaumont later adapted into an equally famous Twilight Zone episode, along with “Perchance to Dream” and “Song for a Lady.”

A prolific and influential American author of speculative fiction, Charles Beaumont (1929–1967) was known for short stories in the horror and science fiction subgenres, as well as for his work for television and film.

Directed by Susan Hanfield, this collection is narrated by Stefan Rudnicki, Paul Boehmer, and the one and only Harlan Ellison (who was a personal friend of Mr. Beaumont himself!). So dive into the weird and wild, and start your journey today.

For those of us who prefer a road map, here is your full Table of Contents:

“The Music of the Yellow Brass” – Paul Boehmer

“Song for a Lady” (adapted for Twilight Zone) – Stefan Rudnicki

“The Guests of Chance” (with Chad Oliver) – Paul Boehmer

“A Death in the Country” – Stefan Rudnicki