In the Midst of Life: Tales of Soldiers and Civilians 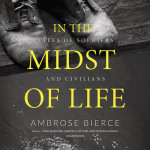 I consider anybody a twerp who hasn’t read the greatest American short story, which is ‘Occurrence at Owl Creek Bridge,’ by Ambrose Bierce. It isn’t remotely political. It is a flawless example of American genius, like ‘Sophisticated Lady’ by Duke Ellington or the Franklin stove.

IN THE MIDST OF LIFE: TALES OF SOLDIERS AND CIVILIANS is a collection of twenty-six short stories detailing the lives of soldiers and civilians during the American Civil War. Ambrose Bierce’s fifteen stories about Civil War soldiers include “An Occurrence at Owl Creek Bridge,” “Chickamauga,” and “Killed at Resaca.” Bierce’s eleven stories about the lives of civilians during the Civil War period include “The Famous Gilson Bequest” and “The Boarded Window.”

We brought together three narrators, Paul Boehmer, Gabrielle de Cuir, and Stefan Rudnicki, for this stirring collection, which continues to remain relevant 100 plus years after its publication.

Ambrose Bierce (1842–ca. 1914), American journalist, soldier, topographer, short-story writer, and poet, was born in Ohio. He enrolled at the Kentucky Military Institute and fought in numerous battles of the Civil War. In 1892, Bierce published his masterpiece Tales of Soldiers and Civilians (publication date 1891), a collection of Civil War stories; the English version was re-titled In the Midst of Life (1892, augmented in 1898 and 1909). He disappeared into war-torn Mexico in 1913.

Don’t be a twerp – get your copy today.