VALENTINES: A Bouquet of Letters and Poetry for Lovers The Dynamic Duo: Henry Kuttner and C. L. Moore

Ambrose Bierce’s In the Midst of Life

“I consider anybody a twerp who hasn’t read the greatest American short story, which is ‘Occurrence at Owl Creek Bridge,’ by Ambrose Bierce. It isn’t remotely political. It is a flawless example of American genius, like ‘Sophisticated Lady’ by Duke Ellington or the Franklin stove.” —Kurt Vonnegut 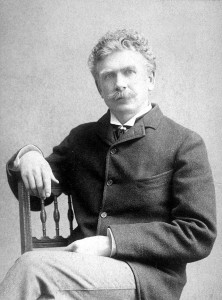 Ambrose Bierce (1842–ca. 1914), American journalist, soldier, topographer, short-story writer, and poet, was born in Ohio. He enrolled at the Kentucky Military Institute and fought in numerous battles of the Civil War, including Shiloh, Chickamauga, Missionary Ridge, and Franklin. He settled in San Francisco and, in 1887, began writing for Hearst’s Examiner. In 1892, Bierce published his masterpiece Tales of Soldiers and Civilians (publication date 1891), a collection of Civil War stories; the English version was re-titled In the Midst of Life (1892, augmented in 1898 and 1909). He disappeared into war-torn Mexico in 1913. (Check out this terrific timeline of his life!)

“These tales are so original as to defy comparison…weird and curious…There’s nothing like it in fiction.” –New-York Tribune

Yet, Michael Dirda shares in his New York Review of Books article: “Bierce himself always insisted that most of his Civil War fiction was based on fact. As he wrote in a letter, ‘It commonly occurs that in my poor little battle-yarns the incidents that come in for special reprobation by the critics as ‘improbable’ and even ‘impossible’ are transcripts from memory—things that actually occurred before my eyes.'” And boy did he witness a lot! 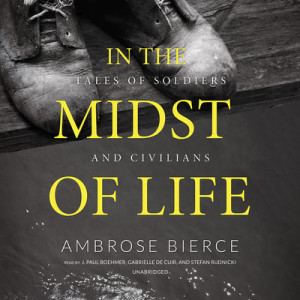 IN THE MIDST OF LIFE: TALES OF SOLDIERS AND CIVILIANS is a collection of twenty-six short stories detailing the lives of soldiers and civilians during the American Civil War. Ambrose Bierce’s fifteen stories about Civil War soldiers include “An Occurrence at Owl Creek Bridge,” “Chickamauga,” and “Killed at Resaca.” Bierce’s eleven stories about the lives of civilians during the Civil War period include “The Famous Gilson Bequest” and “The Boarded Window.” –downpour.com

We brought together three narrators, Paul Boehmer, Gabrielle de Cuir, and Stefan Rudnicki, for this stirring collection, which continues to remain relevant 100 plus years after its publication.

As always, here at Skyboat we try our best to make sure you know who is reading what.

“A Horseman in the Sky” – Stefan Rudnicki

“A Son of the Gods” – Stefan Rudnicki

“One of the Missing” – Paul Boehmer

“An Affair of Outposts” – Stefan Rudnicki

“The Story of a Conscience” – Stefan Rudnicki

“One Kind of Officer” – Paul Boehmer

“One Officer, One Man” – Stefan Rudnicki

“The Man Out of the Nose” – Gabrielle de Cuir

“An Adventure at Brownville” – Stefan Rudnicki

“A Watcher by the Dead” – Stefan Rudnicki

“The Man and the Snake” – Paul Boehmer

“The Eyes of the Panther” – Stefan Rudnicki

Don’t be a twerp! And don’t miss out on this cornerstone of nineteenth-century American literature. Purchase your copy today.