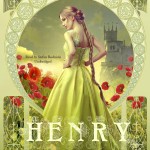 What do you do when you’ve written a book and one of the other characters wants his story told? When he just keeps tugging at you and won’t let go?

You write HENRY, THE GAOLER. At least, that’s what author A.W. Exley did.  Even when a character doesn’t speak, he makes himself heard.

In this companion prequel to  ELLA, THE SLAYER, listen as narrator Stefan Rudnicki tells us Henry’s story.

The Great War left its mark on Henry, like it did so many others.  In Henry’s case, it robbed him of his voice.  Before he left Ella and the others at Serenity House, he had been just like anyone else. Now, he didn’t speak. He couldn’t speak.

The only thing that helped him get through was a photograph of a young girl with long, blonde plaits. Hazel. His childhood friend.

Hazel was still angry with Henry for not helping her escape the tower before he left for the war. After the Titanic sank in 1912, Hazel’s parents saw the disaster as a portent of doom and tried to keep the world at bay.  They became a little overprotective and locked her away in a tower, trying to keep the rest of the world at bay.

Now Henry needs to warn Hazel and her parents about the deadly pandemic that’s sweeping through the area.  Everyone appears to be dying from Spanish influenza. In reality, they’re being turned into the undead.

Can he get Hazel to forgive him for leaving her?

Can she help him escape the prison of his own mind?