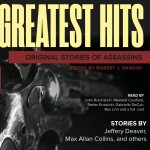 Skyboat Media and Ten 12 Entertainment are proud to present GREATEST HITS:  ORIGINAL STORIES OF ASSASSINS, HIT MEN, AND HIRED GUNS.  Each story was written specifically for this collection by some of today’s most talented mystery and suspense writers. When combined with this kind of narrating talent, this audiobook is a “hit.”

“The Catch” by James W. Hall.  Read by John Rubinstein.

“The Greatest Trick of All” by Lee Child. Read by Stefan Rudnicki.

“Upon My Soul” by Robert J. Randisi.  Read by Stephen Hoye.

“For Sale by Owner” by Jenny Siler.  Read by Margy Moore.

“The Right Tool for the Job” by Marcus Pelegrimas.  Read by Richard Gilliland.

“The Closers” by Paul Guyot.  Read by Stefan Rudnicki.

“Chapter and Verse” by Jeffery Deaver.  Read by John Rubinstein.