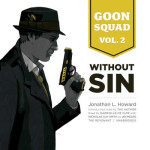 Sample
Unabridged
Release Date: October 6, 2015
Author: Jonathan L. Howard
Gabrielle de Cuir, Jonathan L. Howard, Nicholas Guy Smith
The Goon Squad Series
Book: 2
Director: Gabrielle de Cuir / Publisher: Skyboat Media & Blackstone Audio
Read the SkyBlog for this title
An ongoing, episodic “prose comic” from which the pictures are summoned by the magic of words, Goon Squad is set in a version of modern-day Manchester. Its biggest divergence from the real city is that it—along with most other large urban centers—has a team of superheroes to protect it against unusual threats with which the conventional forces of law and order would have problems.
Goon Squad, Vol. 2: Without Sin is composed of: “A Star in Strange Ways,” “Holy Fool,” “Dead Man Tells Tale,” “A Brief History of the Goon Squad,” “Tale of Terror” and “Pomona Island,” as well as an introduction read by the author.
Need to get caught up? Check out Goon Squad, Vol. 1: Without Sin and might as well get Volume 2 while you’re at it! (It’s hard to stop; trust us.)
Humor, Sci-Fi Fantasy, Short Stories
Share →
Tweet