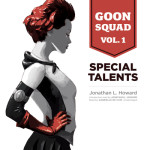 An ongoing, episodic “prose comic” from which the pictures are summoned by the magic of words, Goon Squad is set in a version of modern-day Manchester. Its biggest divergence from the real city is that it—along with most other large urban centers—has a team of superheroes to protect it against unusual threats with which the conventional forces of law and order would have problems.

Compiled exclusively for this audio edition, Goon Squad, Volume 1: Special Talents is composed of six tales: “The New Girl,” “Nightclubbing,” “By the Water, by the Grave,” “Changes,” “No-No Dojo,” and “Exterminating Angel,” as well as an introduction read by author Jonathan L. Howard.

Purchase your copy today. (And if you simply cannot wait for Volume 2 — and we wouldn’t blame you — then check out Howard’s CABAL series in the meantime!)