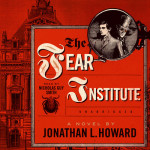 Howard’s affectionate, witty homage to Lovecraft’s dream stories, complete with early-20th-century setting and language, is an enjoyably macabre comic adventure, and his antihero Cabal is, for all his overweening self-confidence, an engaging protagonist whose heart is not quite as hard as he would like to pretend.

Johannes Cabal, “a necromancer of some little infamy,” made his literary debut in two short stories before making the jump to novels.  Johannes Cabal: The Fear Institute is number three in this wildly popular series.  But who is the man behind the necromancer?  Jonathan L. Howard is a novelist, game designer, scriptwriter, and a veteran of the computer games industry.  In addition to Cabal, Howard has also authored the YA novels Katya’s World and Katya’s War, as well as the ongoing episodic “prose comic” Goon Squad. He lives in the UK with his wife and daughter.

And in case you’re wondering what Cabal gets up to in Book 3, this time, his talents are purchased by the Fear Institute as they hunt for the phobic animus—the embodiment of fear. The three institute members, led by Cabal and his silver key, enter the Dreamlands and find themselves pursued by walking trees plagued with giant ticks, stone men that patrol the ruins of their castles, cats that feed on human flesh, and phobias that torment and devastate. The intrepid explorers are killed off one by one as they traipse through this obfuscating and frustrating world, where history itself appears to alter. Cabal, annoyed that the quest is becoming increasingly heroic, finds himself alone with the institute’s only remaining survivor, and after a shockingly violent experiment, begins to suspect that not everything is quite as it seems. –Blackstone Audio

And how about that narrator?  Oh yes, Nicholas Guy Smith.  A fellow Brit, in fact.  As well as a postgraduate of Cambridge University and a highly rated and diverse voice-over actor who has been heard in feature films, TV commercials, and video games.  He has voiced characters for Disney, Warner Bros., Universal, and the Cartoon Network.  He is also an accomplished abstract expressionist artist and a professor of Speech Communication.

Watch the video below to see how this magnificent actor went about creating these characters on audio, and buy your own copy today!