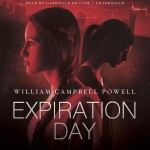 This debut novel’s premise…raises very interesting and meaningful questions about philosophy, humanity, personal choice, and feminism, which could lead to rich discussions. Hand this title to fans of Margaret Atwood’s classic, The Handmaid’s Tale (1986) and Veronica Roth’s Divergent (2011)

“Are you for real?”  In Tania Deeley’s world, the answer to this question isn’t rhetorical, nor is it so simple. It’s 2049. Most children are sophisticated androids who “expire” on their eighteenth birthday. Except for Tania. When Tania comes home from school on holiday, she finds that her best friend seems to have changed. Are these simple “human” changes are are they upgrades purchased from Oxted? Tania begins to wonder this about everyone in her life.