EXILED: A Return of the Elves Novella 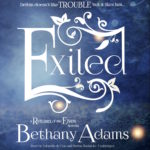 I thoroughly enjoyed the new characters as well as the old in this tale and hope we can see more of Delbin in the future. As always, I strongly recommend you read this book- and if you are new to these books, check out the rest. You won't be disappointed.

Skyboat Media is proud to present, “EXILED,” the latest addition to “The Return of the Elves” series by Bethany Adams.

For a hundred years, Delbin has lived on Earth, voluntarily cut off from his birth land, Moranaia. He’s learned to hide his elven nature and use his mind magic without getting noticed. Until he accidentally wields it on the Moranaian scout sent to check on him.

Though Inona has good reason to mistrust exiles, part of her job is to make sure they aren’t causing trouble. She sets out for Earth with one goal—get this annoying mission over with. But from the moment Delbin tries to use his power on her, she can tell he is different. As more of his story unfolds, she learns that some exiles might not be what they seem.

When a rogue Moranaian prince tries to recruit Delbin, Inona’s mission becomes anything but standard. Now Delbin and Inona must work together to hunt down the prince and uncover his latest plot.

Delbin might not be able to return to Moranaia, but he’ll do anything to save it.

BONUS – Includes the free, stand-alone short story “The Grove Between,” previously published in the Against All Odds anthology. (Synopsis courtesy of the author).

Stefan Rudnicki and Gabrielle de Cuir bring their narrating talents for this latest installment of the series.

If you like what you hear, check out SOULBOUND and SUNDERED, the first titles in the “Return of the Elves” series.  Available on downpour.com.