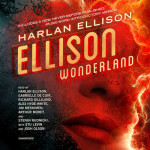 Originally published in 1962 and updated in later decades with a new never-before published introductory memoir, ELLISON WONDERLAND contains sixteen masterful stories from the author’s early career. This collection shows a vibrant young writer with a wide-ranging imagination, ferocious creative energy, devastating wit, and an eye for the wonderful and terrifying and tragic. Among the gems are “All the Sounds of Fear,” “The Sky Is Burning,” “The Very Last Day of a Good Woman,” and “In Lonely Lands.” Though they stand tall on their own merits, they also point the way to the sublime stories that followed soon after and continue to come even now, more than fifty years later. –downpour.com

Harlan, an Audie-winning narrator himself, generously shared these tales and was joined by a stellar cast of narrators, including Gabrielle de Cuir, Richard Gilliland, Alex Hyde-White, Jim Meskimen, Arthur Morey, and Stefan Rudnicki, with Stu Levin, and Josh Olson reading the afterword he penned.

Harlan Ellison® has written or edited more than seventy books and more than 1,700 stories, essays, and articles, as well as dozens of screenplays and teleplays. He has won numerous awards, including the Edgar Award, Hugo Award, an Audie Award for Best Solo Narration, and his fourth Nebula Award, breaking genre records. Harlan was named a Grand Master by the Science Fiction and Fantasy Writers of America in 2006.

Start your journey to ELLISON WONDERLAND and purchase your copy today.