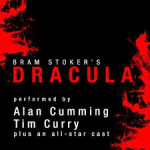 Listening to this full-cast performance turns out to be remarkably suspenseful and chilling…The superlative cast lends this powerful production the diversity that is required by the structure of the novel…Each actor employs various accents, infusing into the characters vibrant emphasis, urgency, and dread.

Because of the widespread awareness of the story of the evil Transylvanian count and the success of numerous film adaptations that have been created over the years, the modern audience hasn’t had a chance to truly appreciate the unknowing dread that readers would have felt when reading Bram Stoker’s original 1897 manuscript. Most modern productions employ campiness or sound effects to try to bring back that gothic tension, but we’ve tried something different. By returning to Stoker’s original storytelling structure – a series of letters and journal entries voiced by Jonathan Harker, Dr. Van Helsing, and other characters – with an all-star cast of narrators, we’ve sought to recapture its originally intended horror and power.