Different Kinds of Dead and Other Tales 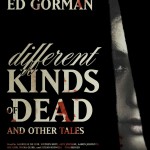 Gorman knows how to keep the reader on the edge of his seat.

For your listening pleasure, Skyboat Media and Ten12 Entertainment are proud to present Different Kinds of Dead and Other Tales by Ed Gorman.

Hear why Kirkus Reviews calls Gorman “one of the most original writers in crime fiction today.”

For example:  A mysterious and beautiful girl who teaches arrogant young men about true love, a lonely traveling salesman who learns that his passenger is death, children who can absorb the psychic pain of their parents, a desperately pursued serial killer who hides his face under gauze in a hospital room, a woman who loves the alien infant nobody else wants…and there’s more.

The Brasher Girl-read by Stephen Hoye

Second Most Popular-read by Aaron Johnston

The Broker-read by Arte Johnson

The Long Sunset-read by Stefan Rudnicki

Purchase your audiobook from Downpour today!