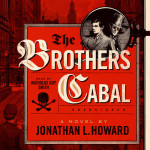 Cabal, the detective and necromancer, is full of charismatic amorality, making him both a classical and refreshing antihero.

Johannes Cabal, “a necromancer of some little infamy,” made his literary debut in two short stories before making the jump to novels.  The Brothers Cabal is number four in this wildly popular series.

Horst Cabal, the most affable vampire one is ever likely to meet, is resurrected by an occult conspiracy that wants him as a general in a monstrous army.  Their plan: to create a country of horrors, a supernatural homeland.  As Horst sees the lengths to which they are prepared to go and the evil they cultivate, he realizes that he cannot fight them alone.  What he really needs on his side is a sarcastic, amoral, heavily armed necromancer.  As luck would have it, this exactly describes his brother.  Johannes Cabal returns in the one-of-a-kind, genre-bending series.

But just who is the man behind the necromancer?  Jonathan L. Howard is a novelist, game designer, scriptwriter, and a veteran of the computer games industry.  In addition to Cabal, Howard has also authored the YA novels Katya’s World and Katya’s War, as well as the ongoing episodic “prose comic” Goon Squad. He lives in the UK with his wife and daughter.

And how about that narrator?  Oh yes, Nicholas Guy Smith.  A fellow Brit, in fact.  As well as a postgraduate of Cambridge University and a highly rated and diverse voice-over actor who has been heard in feature films, TV commercials, and video games.  He has voiced characters for Disney, Warner Bros., Universal, and the Cartoon Network.  He is also an accomplished abstract expressionist artist and a professor of Speech Communication.

Watch the video below to see how this magnificent actor went about creating these characters on audio, and buy your own copy today!