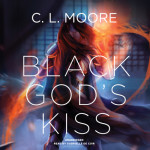 For those who have never read the wondrous adventures of the First Lady of Sword-and-Sorcery … oh, gods, how I envy the dark pleasures before them.

Catherine Lucille Moore (1911–1987), an influential science fiction and fantasy writer, was one of the first women to write in either genre. Her acclaimed Jirel of Joiry stories first appeared in pulp magazines in the 1930s. She and fellow author Henry Kuttner married in 1940, and collaborated on numerous projects together.

First published in the pages of Weird Tales in 1934, C. L. Moore’s Jirel of Joiry is the first significant female sword-and-sorcery protagonist and one of the most exciting and evocative characters the genre has ever known. Published alongside seminal works by H. P. Lovecraft and Robert E. Howard, the five classic fantasy tales included in this volume easily stand the test of time and often overshadow the storytelling power and emotional impact of stories by Moore’s more famous contemporaries. –downpour.com

And in the spirit of partnership, Skyboat’s Gabrielle de Cuir narrated this seminal work from one of fantasy’s most important authors, while Stefan Rudnicki took on Kuttner’s FURY. So, there you have it: two outstanding fantasy and science fiction novels from two gifted authors brought to life by two outstanding narrators. Purchase your copy today.