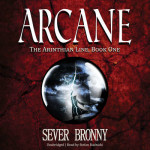 Stefan Rudnicki lends his gravitas to ARCANE, the debut novel in Sever Bronny’s fantasy adventure series the Arinthian Line. Three friends navigate an ancient castle, endure grueling training, challenge old mysteries, and learn that a bond forged in tragedy might just be the only thing to save them from a ruthless enemy. –downpour.com

This is one series you won’t want to miss. Purchase your copy today.