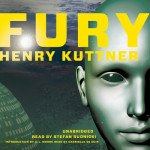 One of the major names in science fiction.

Henry Kuttner (1915 – 1958) was an American author of science fiction, fantasy, and horror. He grew up in Los Angeles, and started writing pulp science fiction and horror in the late 1930s. He made his first sale to Weird Tales in 1936 and began publishing science fiction stories the following year. He began a correspondence with H.P. Lovecraft and it was through this correspondence that he met his wife C. L. Moore.

Beneath the rolling seas and deadly atmosphere of Venus are the Keeps—fully enclosed cities that house descendants of the survivors who first harbored atomic energy to escape a dying earth. In massive superstructures built beneath the Venusian seas, a complex feudal society devoted simply to decadence has evolved. Presiding over that society are Immortals—genetic throwbacks to the mutant atomic survivors.

Born into it all is Sam Harker, son of an Immortal, but an exile. Sam’s search for revenge and his great abilities make him more powerful than the more decadent residents of the Keeps … and perhaps even more powerful than the Immortals themselves. He seeks mass appeal as a politician in a campaign that assaults society. It is not until everything is destroyed—that is, in the aftermath of destruction—that the reclamation of human destiny is even a remote possibility.–downpour.com

And in the spirit of partnership, Skyboat’s Stefan Rudnicki narrated FURY, with Gabrielle de Cuir stepping in to voice FURY’S introduction written by C.L. Moore, and then Gabrielle went on to narrate Moore’s BLACK GOD’S KISS.

So, there you have it: two outstanding fantasy and science fiction novels from two gifted authors brought to life by two outstanding narrators. Purchase your copy today.