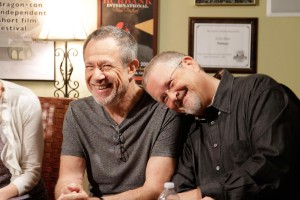 The 276-page script has been received, read, studied, proofed, and printed.  The pronunciation key has been made and sent off to OSC himself.  The character list has been made—painstakingly, we might add; there are over 100!  The 27 actors have been auditioned, called back, considered for their vocal versatility, pitch, and all around incredible talent, then cast.  The studio has been booked.  Interns have been hired.  The production schedule has been made and revised, then revised again.  The budget has been made and revised, then revised again, then revised a bunch more times.  Our tweets have been atwitter.  Our Facebook page has been liked.  Call times have gone to actors.  Scripts have gone to actors.  Lunch menus have been amassed.  A videographer has been catching pieces and bits of the pre-production frenzy: chats with Director Gabrielle de Cuir, talks with Producer Stefan Rudnicki, snippets of production meetings, and best of all, an exclusive interview with Mr. Orson Scott Card himself, not to mention some incredible behind-the-scenes fun stuff you’re seriously gonna want to see, and we haven’t even started recording yet!

Be a part of this one-of-a-kind production by following us on Twitter and liking us on Facebook!  Want a sneak peek of a favorite scene?  Have a question for one of our actors?  Let us know via Twitter, FB, or leave a message here, and we’ll honor your request.  We’ll be posting real time in-studio updates and behind-the-scenes footage you won’t get anywhere else, plus a daily production journal here on the blog.

Now, what are we forgetting….?

One Response to JULY 8: LAST DAY OF PRE-PRODUCTION!