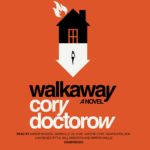 The darker the hour, the better the moment for a rigorously-imagined utopian fiction. Walkaway is now the best contemporary example I know of, its utopia glimpsed after fascinatingly-extrapolated revolutionary struggle. A wonderful novel: everything we've come to expect from Cory Doctorow and more.

Skyboat Media and Cory Doctorow are proud to present the audio version of WALKAWAY, featuring a full cast.  Doctorow’s first adult novel in eight years offers a gritty and hopeful look at the future.

Hubert Vernon Rudolph Clayton Irving Wilson Alva Anton Jeff Harley Timothy Curtis Cleveland Cecil Ollie Edmund Eli Wiley Marvin Ellis Espinoza aka Hubert, Etc is getting a little old to hang out at the “Communist parties,” techno-raveups in abandoned industrial spaces, full of insta-printed drugs and toys.  Hubert’s friend Seth and their ultra-rich heiress friend Natalie are getting tired of this kind of thing too.  Natalie was finished, years ago, with her overcontrolling zillionaire dad.

After watching the breakdown of modern society, Hubert, Etc. really has nowhere left to be except among these people, the disaffected youth who party all night and scorn those sheep on the morning commute.

Now that anyone can manufacture food, clothing, shelter with equipment comparable to a computer printer, there seems to be little reason to to stick with the world of rules and jobs. So, like hundreds of thousands of others in the mid-21st century, the three of them…walk away.

Mind you, it’s still dangerous out there. Much of the countryside is wrecked by climate change, the cities are dead from industrial flight and predators (both human and animal) are with us always. Yet when the initial pioneer walkaways flourish, more people join them. Then the walkaways discover the one thing the ultra-rich have never been able to buy: how to beat death.

Now it’s war—a war that will turn the world upside down.

Fascinating, moving, and darkly humorous, Walkaway is a multi-generation science-fiction thriller about the wrenching changes of the next hundred years…and the very human people who will live their consequences. (Description courtesy of Tor and Amazon)

Purchase your copy of WALKAWAY today.