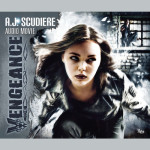 VENGEANCE is a story of just that--two characters will stop at nothing to settle the score after their families are slain by the Mob. Kristoffer Tabori's voice has the perfect abrasive gravel for Lee, the gunman, and Stephanie Zimbalist plays Cyn, a 19-year-old with an arsenal of knives and a fiery temper. As the two assassins tread on each other's turf, and the FBI closes in, they need to figure out how to work together. Gunshots, screeching tires, and other sound effects add to the action in this "audio movie," underscored with a heart-pumping cinematic score. As the subject matter suggests, this is a bloody story, with scenes of extreme violence. Ditch the Cineplex ticket and pick up this title for an intense, action-packed thriller.