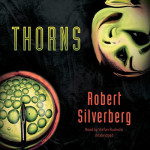 Where Silverberg goes today, the rest of science fiction will follow tomorrow!

Duncan Chalk is a monstrous media mogul with a vast appetite for other people’s pain. He feeds off it and carefully nurtures it in order to feed it to the public. It is inevitable that Chalk should home in on Minner Burris, a space traveler whose body was taken apart by alien surgeons and then put back together again—differently. Burris’ pain is constant. And so is that of Lona Kelvin, used by scientists to supply eggs for one hundred children and then ruthlessly discarded.

Only an emotional vampire like Chalk can see the huge audience eager to watch a relationship develop between these two damaged people. And only Chalk can make it happen. –downpour.com

After his narration snagged Silverberg’s NIGHTWINGS a spot on AudioFile‘s list of great listens for 2014, Stefan Rudnicki is back in the booth to narrate THORNS, a 1968 Hugo and Nebula nominee from science fiction Grand Master Robert Silverberg.

Robert Silverberg’s first published story appeared in 1954 when he was a sophomore at Columbia University. Since then, he has won the prestigious Nebula Award an astonishing five times and the Hugo on four occasions; he has been nominated for both awards more times than any other writer. In 1999 he was inducted into the Science Fiction Hall of Fame, and in 2004 the Science Fiction and Fantasy Writers of America gave him their Grand Master Award for career achievement. He remains one of the most imaginative and versatile writers in science fiction.