The Reformation (Story of Civilization, Volume 6) 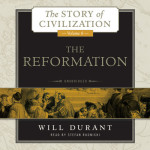 “Durant’s monumental history of Europe from 1300 to 1564 presents a narrator with great challenges, but Stefan Rudnicki lives up to them. His strong, endlessly listenable voice helps keep one’s interest over the long haul, and his care with and understanding of the text help lead one through dense passages that are often laden with foreign words or strings of difficult names in French, Russian, or Arabic. Given the difficulty and complexity of the material, Rudnicki does a remarkable job. His pacing, energy, and expression of sense and feeling help bring the book alive.”

Purchase your copy today at downpour.com.