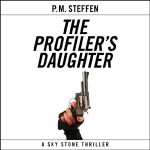 Gabrielle de Cuir's narration is just right for Sky's determined personality. De Cuir blends a pleasing voice with an intelligent take on Sky....She keeps this thriller on track, dealing evenhandedly with a variety of secondary characters, romance, murder, and a high-stakes, fast-paced conclusion.

A grisly murder. A six-year-old eyewitness. A gun from the grave.

The Profiler’s Daughter is a psychologically haunting thriller that combines murder mystery, love triangle, and family intrigue in one satisfying page burner.

Sky Stone was born into the wealth and privilege of Boston’s oldest Brahmin family but chooses instead to follow in the footsteps of her deceased father, legendary FBI profiler Monk Stone. In the chilly morning hours before the Boston Marathon, when a beautiful university student is found strangled and mutilated, her body left at the base of Heartbreak Hill, Sky returns from self-imposed exile to investigate. Thirty-six hours into the investigation, Sky’s world turns upside down when she is fired from the Homicide team. They pin the murder on an innocent man, forcing Sky into a life-threatening game of cat and mouse with the real killer. From the stately mansions of Beacon Hill to the flat scrubland of central Texas, Sky keeps the reader on a razor’s edge, culminating in a no-holds-barred shoot-out.

The Profiler’s Daughter, the first in the Sky Stone Thriller series, introduces a moody, enigmatic, and brilliant female sleuth with the fierce bite of Stieg Larsson’s Lisbeth Salander. As adeptly written as Martin Cruz Smith’s complex Arkady Renko novels, this thriller offers an intriguing plot, richly detailed characters, and an astonishing conclusion guaranteed to leave the listener begging for more.

Dive into the series and purchase your copy today!